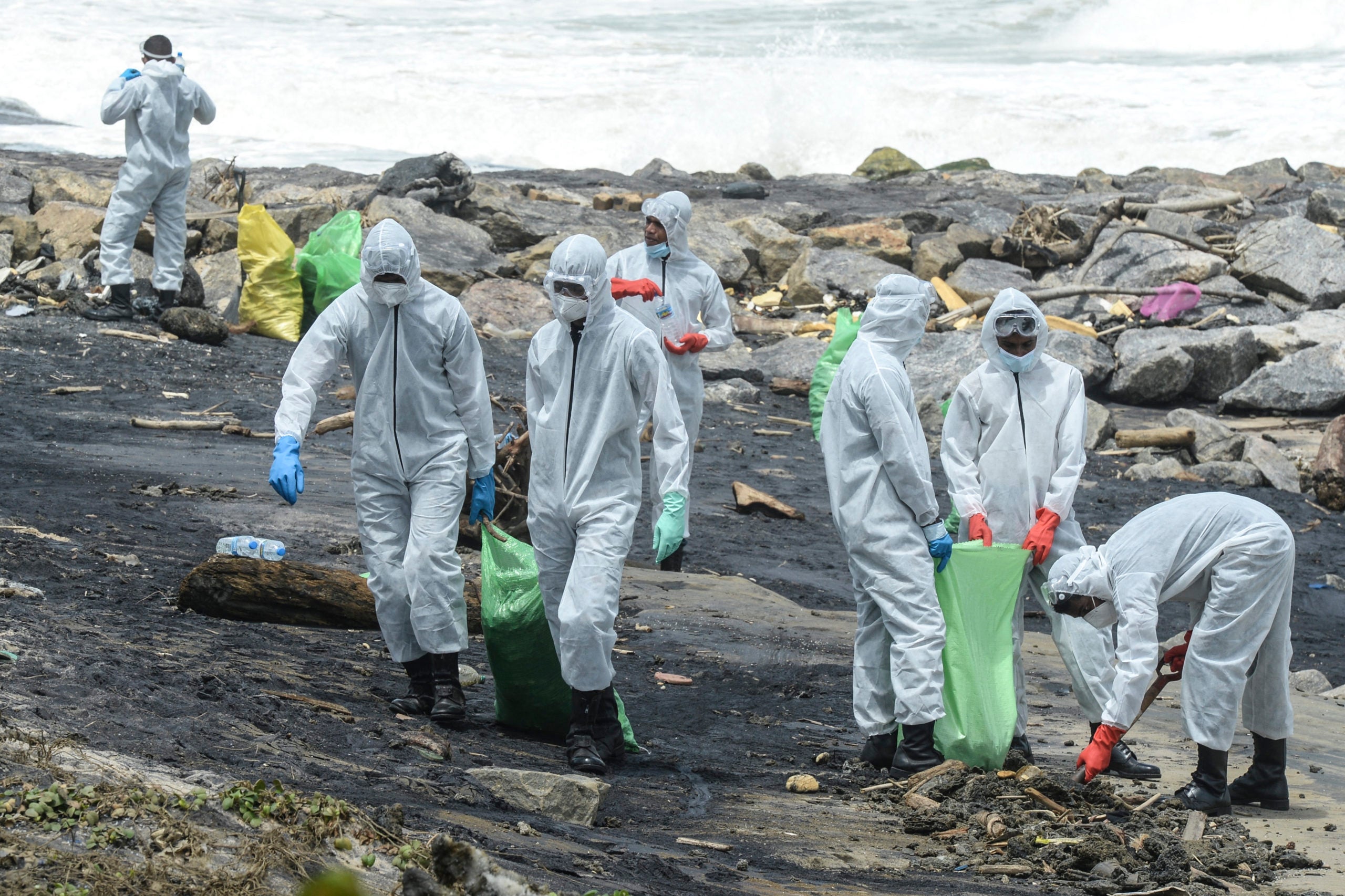 Sri Lanka’s Air force personnel remove debris washed ashore from the Singapore-registered container ship MV X-Press Pearl, which has been burning for the eleventh consecutive day in the sea off Sri Lanka’s Colombo Harbor, on a beach in Colombo on May 30, 2021. (Photo by LAKRUWAN WANNIARACHCHI / AFP)

NEGOMBO, Sri Lanka — Sri Lankan authorities Sunday said they will sue the owners of a Singapore-registered cargo carrier that has burned for 11 straight days off the island’s west coast and caused some of its worst-ever marine pollution.

Police said a criminal investigation was also launched into the blaze aboard the MV X-Press Pearl, which was carrying 25 tonnes of nitric acid and a huge amount of plastic raw materials.

The intense fire, still burning at the rear of the 186-meter (610 feet) vessel, has destroyed much of the cargo, some of which also fell into the Indian Ocean.

Sri Lanka’s Marine Environment Protection Authority said it met with attorney general Sanjaya Rajaratnam on Sunday to plan legal action against the owners of the vessel, its crew, as well as insurers.

“We have gone through the details and will be taking action against those responsible,” MEPA Chairman Dharshani Lahandapura told reporters in Colombo.

She said they were, however, yet to make an assessment of the environmental damage, but she believed it was the “worst marine pollution” Sri Lanka has ever suffered.

Sri Lanka’s navy chief, Vice Admiral Nishantha Ulugetenne, who was also at Sunday’s talks with the island’s chief prosecutor, said the X-Press Pearl was still on fire, but the blaze was now under control.

“It will take a few more days to completely extinguish the fire,” Ulugetenne said, adding that his assessment was that there was no danger of the vessel breaking up.

But he ruled out towing it away from Sri Lankan waters until the fire was completely put out and experts examined the vessel for any structural weaknesses.

International salvage firm SMIT is leading efforts to douse the flames and is being assisted by Sri Lanka’s navy and the Indian coastguard.

The three-month-old ship was heading to Colombo from Gujarat, India. It had previously visited Qatar and Dubai and was due to go to Malaysia and Singapore after calling at Colombo.

The 25-member crew, who have already been evacuated from the ship, will be questioned on Monday, police said.

Authorities said last week they believed the fire was caused by a nitric acid leak that the crew had been aware of since May 11.

“The captain and the crew were in quarantine, but health authorities have told us that we can question them from tomorrow,” Ajith Rohana, a police spokesperson, told AFP.

“We have already sent samples of polluted seawater and burnt debris from the vessel for a forensic report.”

The ship’s owners, X-Press Feeders, said the vessel’s hull remained intact and there was no damage to its fuel tanks.

Fishermen have been banned from the 80-kilometer (50-mile) stretch of coast, where tonnes of plastic pellets have washed up, sparking a massive clean-up effort.

Fisheries minister Kanchana Wijesekera said the government would compensate them for their expected losses.

At least 4,500 fishermen were affected at the fishing and tourist resort of Negombo, officials from the Roman Catholic church in the area said Saturday as they pleaded for financial aid.

Priest Sujeewa Athukorale told AFP on Saturday that there were also fears of reduced demand for seafood from the area over contamination fears.