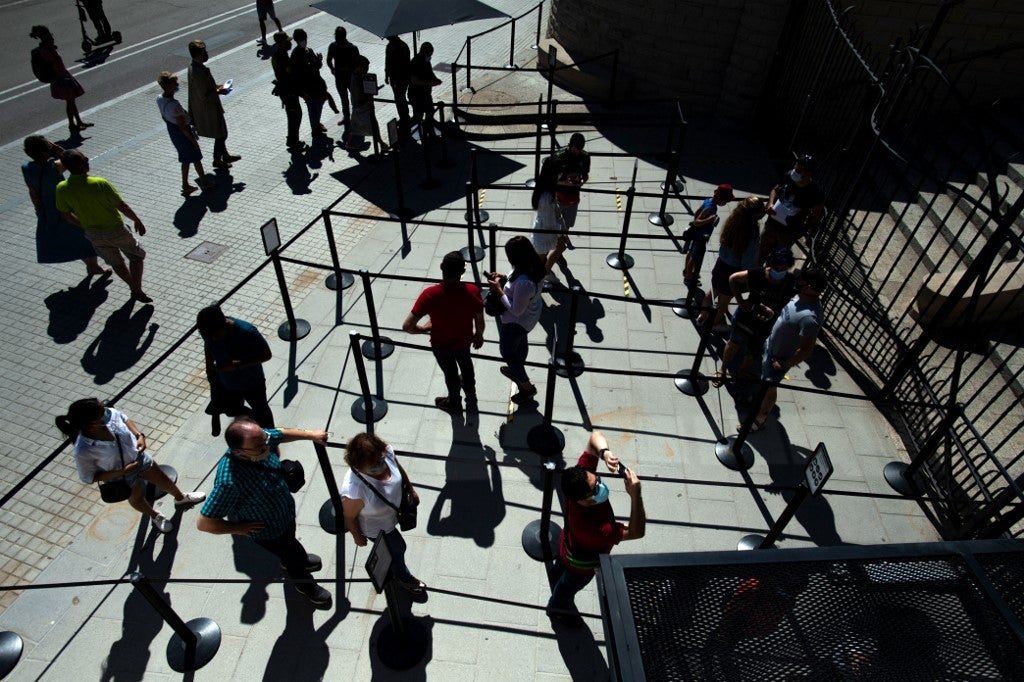 People queue to visit the Sagrada Familia basilica in Barcelona on May 29, 2021 as it reopens for tourist visits. (Photo by Josep LAGO / AFP)

Quarantine-free travel bubbles were hailed as tourism’s “godsend” earlier this year, but cancellations and suspensions have deflated hopes they will herald a return to pre-pandemic normality.

Perhaps the world’s most high-profile bubble opened between Australia and New Zealand on April 19, leading to emotional scenes as families split when borders closed almost 400 days earlier were reunited.

Since then, New Zealand has ordered partial shutdowns on four occasions due to virus scares in Australian states, the most serious of which forced Melbourne into a snap lockdown this week.

A spike of Covid-19 cases in Taiwan burst its bubble with the tiny Pacific nation of Palau last week, while Hong Kong and Singapore have been struggling to stand up a quarantine-free travel arrangement for six months.

Australian Prime Minister Scott Morrison will take advantage of the trans-Tasman bubble this weekend, when he travels to New Zealand for the first time since the pandemic hit for talks with Kiwi counterpart Jacinda Ardern.

The pair will meet in the South Island mountain resort of Queenstown, where Ardern has vowed to show him the sights, including adventure activities and glacier-fed lakes.

Shot in the arm 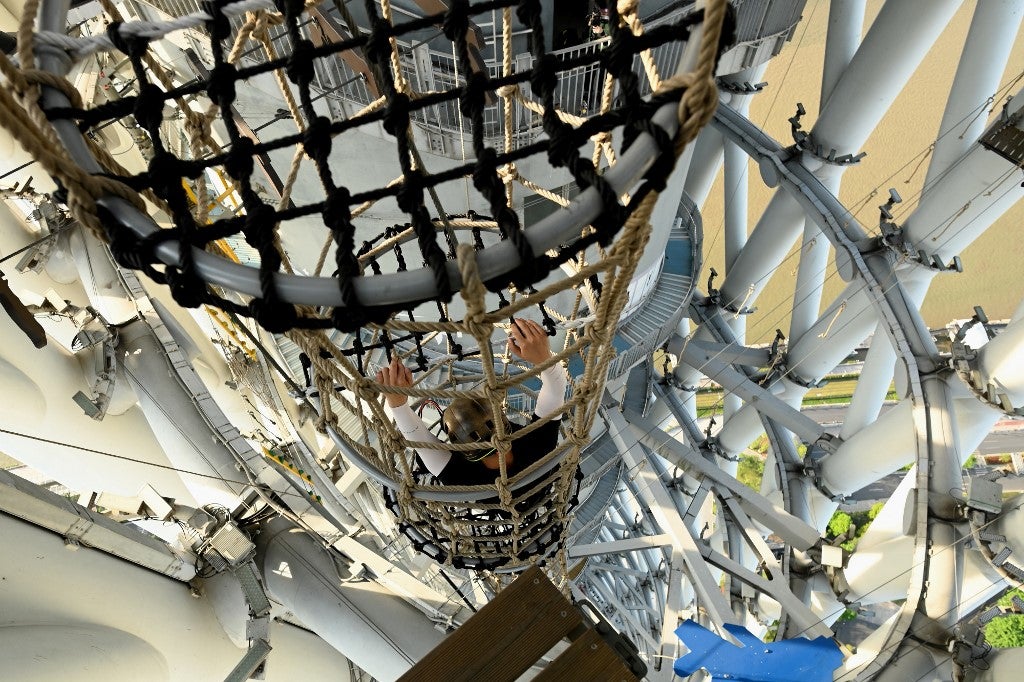 This photo taken on May 23, 2021 shows a guide climbing down a rope tunnel at the adventure park of Canton Tower in Guangzhou, China’s southern Guangdong province. (Photo by NOEL CELIS / AFP)

Like tourist centres everywhere, the so-called “adrenaline capital of the world” struggled without overseas travellers, and Queenstown restaurateur Alex Boyes said the trans-Tasman bubble had not proved a panacea.

Boyes had hoped the bubble would lift his business to about 70 percent of its pre-pandemic level but that has not yet happened.

“Any foreigners we see is something new to us at the moment but this is a time when Queenstown’s traditionally been quite quiet,” he told AFP.

“So we haven’t been swamped by Australians, so to speak, but future bookings through the winter are looking healthy.”

Bookings to Australia from New Zealand in the six week from the bubble’s announcement on April 6 to May 18 were less than a quarter of the numbers during the same period in 2019, data from travel analyst ForwardKeys showed.

ForwardKeys’ Olivier Ponti said bookings the other way were stronger but still less than 60 percent of what would be considered normal.

“Since the two-way trans-Tasman bubble opened last month, bookings have generally been stronger out of Australia than New Zealand — we’re seeing that Kiwis need a bit of encouragement,” a Qantas spokeswoman told AFP. 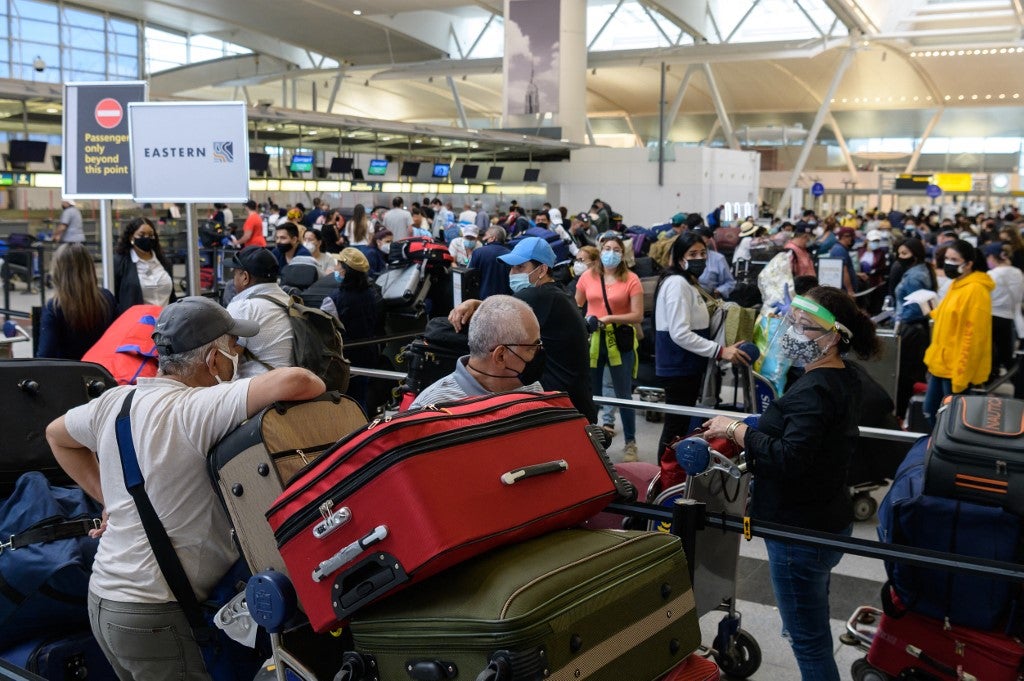 Travelers wait in line at John F. Kennedy (JFK) Airport ahead of Memorial day weekend on May 28, 2021 in New York City. (Photo by Angela Weiss / AFP)

The reason for the caution became apparent this week when New Zealand suspended the bubble with Victoria state and officials in Wellington made it clear that Kiwis stranded in Melbourne’s lockdown were on their own.

“We acknowledge this as a difficult time. It’s disruptive and it’s probably expensive if you’re staying in paid accommodation — that’s one of the realities of travelling in the era of Covid.”

Tourism New Zealand acknowledged such a scare would cause temporary disruption and lead to a “wait-and-see” approach among potential passengers.

But it said Australian market arrivals had recovered to 50 percent, describing it as “a great result and strong contribution”.

“A number of individuals are taking up the offer and booking flights to New Zealand.”

Palau President Surangel Whipps was also taking a glass-half-full approach after the bubble with Taiwan lasted just seven weeks and resulted in fewer than 300 tourists visiting the island nation.

Whipps has described such bubbles as a symbolic “ray of light” in a pandemic-hit world and vowed to reopen the travel corridor with Taiwan as soon as practicable.

“The purpose of the bubble was, of course, to help get our economy get back,” he said.

“I believe it was a success because any tourist, more than one, is a success.”