Mom of teen with lifelong blood disorder asks for help 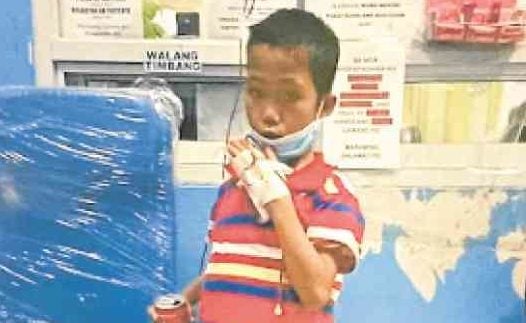 Jason Manlapaz has been spending most of his time either playing games on his mother’s phone or practicing writing his own name.

The 13-year-old had stopped going to school because he was being bullied by his classmates over his enlarged abdomen. Manlapaz suffers from beta thalassemia —a lifetime blood disorder that causes insufficient production of hemoglobin.

When his father died six years ago, his mother, Jocelyn Bongat, took on the responsibility of supporting their family of four by selling “kakanin” (native delicacies) and doing the laundry for their neighbors in Rizal province.

She used to have a stable source of income until she lost her job as a house helper at the onset of the pandemic, making it hard for her to shoulder her son’s medical treatment.

“I had to postpone his monthly visit to the hospital for blood transfusion when I don’t have enough money to take him there,” Bongat said.

Manlapaz’s monthly medications cost around P12,000, exclusive of the laboratory tests and 2D echo procedure he needs to undergo twice a year.

He also needs two bags of type A+ blood every month but due to the lack of donors, he gets only one bag each time.

In a phone interview with the Inquirer, Bongat broke down in tears saying she was thankful for the chance to share her son’s story.

“I am having a hard time. I am hoping that someone will be willing to sponsor his treatment because I can bring him to the hospital only when I have enough money,” she said.