Eased curbs in NCR Plus bubble seen as cases dip 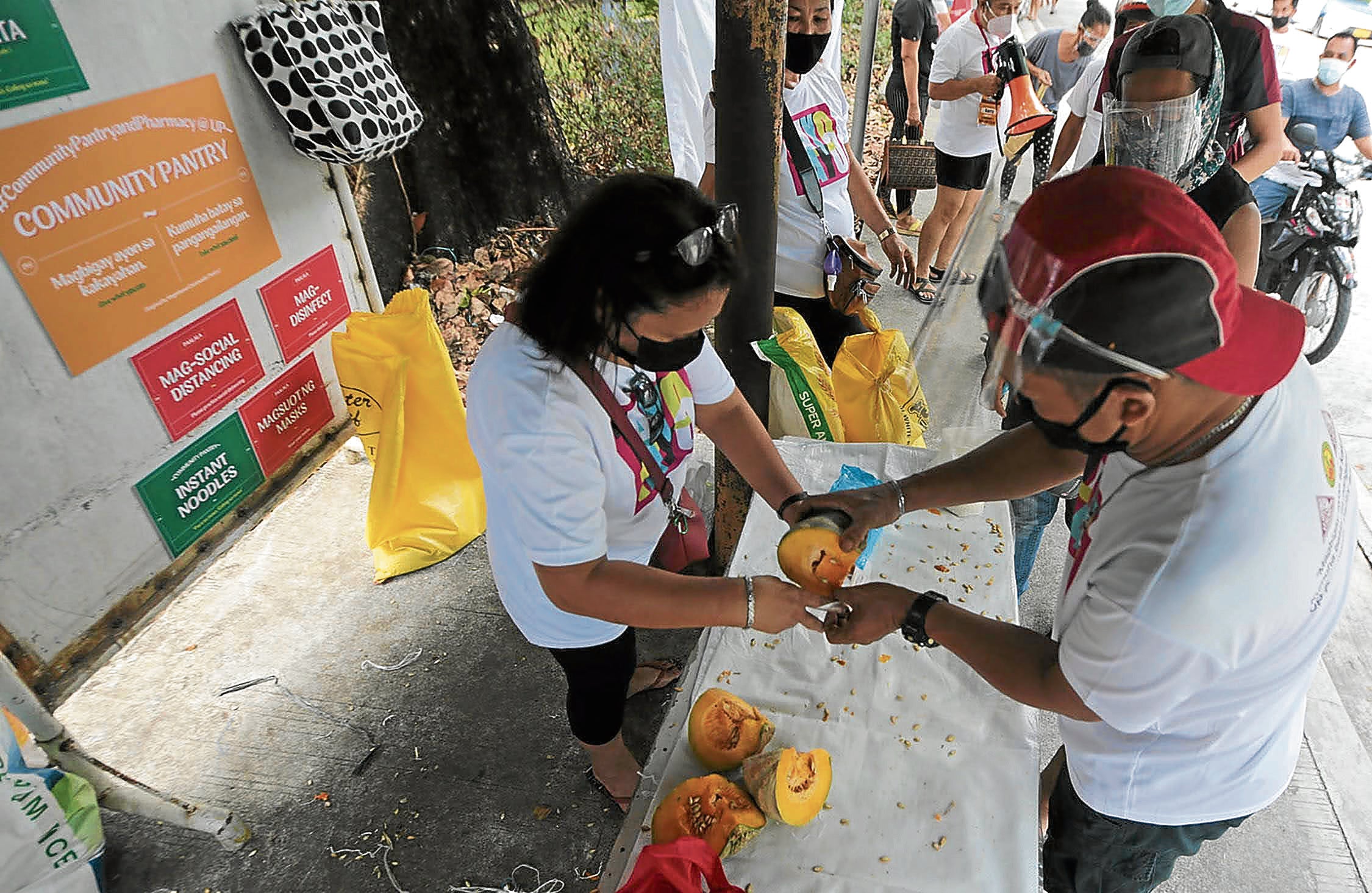 PHILANTHROPY PIECE BY PIECE A community pantry set up by the All UP Alliance Community Pantry distributes vegetables and rice to residents inside the University of the Philippines campus in Quezon City on Wednesday. —GRIG C. MONTEGRANDE

MANILA, Philippines — With Metro Manila mayors backing the gradual reopening of businesses and the improving COVID-19 figures, Malacañang on Thursday said quarantine restrictions in the National Capital Region (NCR) and adjacent provinces could be eased next month.

Presidential spokesperson Harry Roque said the decision on whether to ease or tighten the restrictions would be based on the two-week growth rate and the average daily attack rate, and the hospital utilization rate, which have gone down in Metro Manila and the rest of the country.

The overall health care utilization rate in Metro Manila is 43 percent. The utilization of intensive care unit beds in NCR is 58 percent, 41 percent for isolation beds.

“There’s a likelihood that quarantine classification might be relaxed on the basis of formula, but subject to the recommendation of Metro Manila mayors that any further reopening should be gradual,” Roque said in a press briefing.

In addition to Metro Manila, the quarantine restriction may also be eased in the provinces of Bulacan, Cavite, Laguna and Rizal. They are also referred to as the NCR Plus bubble.

He said establishments wanted to reopen their businesses “slowly but surely.”

The NCR mayors also support the vaccination of front-line workers in essential sectors and uniformed personnel, or those in the A4 category, he said.

They are amenable to expanding the venue capacity for religious activities to 50 percent from the current 30 percent, he added.

But he said the mayors decided to keep the 10 p.m. to 4 a.m. curfew in the metropolis.

Dr. Alethea De Guzman, officer in charge of the Epidemiology Bureau of the Department of Health (DOH) acknowledged the decline in the number of COVID-19 infections, but noted that testing had also gone down.

She said this could be due to the growing number of rapid antigen tests used in Metro Manila, whose results were not included in the DOH’s daily reports of case counts.

The DOH reports only the results of the reverse transcription-polymerase chain reaction (RT-PCR) tests, the “gold standard,” which detects the actual presence of SARS-CoV-2, the virus that causes the severe respiratory disease.

Antigen tests, which are less sensitive than the RT-PCR tests, only imply the presence of the virus but results could be obtained in as fast as half an hour.

From a record high of 67,563 tests on April 14, the DOH reported that there were only 36,630 tests last Monday, with a positivity rate of 13.5 percent. This compares with the 24.2 percent positivity rate on April 2 during the surge, or nearly one in four who were tested was positive for the virus.

“When individuals test positive using the antigen test, we take note and tally, and they are isolated and their cases are managed,” De Guzman explained. “We have a tally [of the antigen testing] but this is not included in the total yet.”

Asked whether the DOH would include the antigen test results, De Guzman said this would need “clearance.”

The DOH had recommended antigen tests for specific circumstances, such as confirmatory testing for people who are asymptomatic but had been exposed to a positive case, as well as for use in communities where there are known clusters of cases.

De Guzman said the current number of new infections in the country was around half of the what was recorded during the peak of the surge in April.

While cases in the NCR and nearby provinces are going down, those in the Visayas and Mindanao are rising faster, De Guzman said.

“[This week’s] increase is higher than the increase we saw last week,” she said.

The health department said six laboratories were not able to submit their data on time.