“You might have received Vice Chairman Alfonso Cusi’s letter calling for a national assembly on May 31, 2021,” the memorandum read.

“Said invitation letter is not sanctioned by Authorized National Council officials and violates Section 4 and Section 5, Article XVI, Constitution of the PDP Laban,” it added. 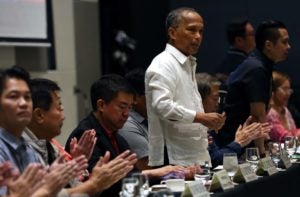 Further, the memorandum stressed that any call for a national council, assembly or meeting is subject to the approval of both Pacquiao and the party chairman, President Rodrigo Duterte, only.

“This is not the time for politics. Instead, let us help our country ravaged by the Covid-19 pandemic,” it added.

Pacquiao had previously warned Cusi not to “divide” the party after the latter reportedly went around the country consulting with their party mates regarding a resolution urging Duterte to run for the vice presidency in 2022.