New COVID-19 cases now just half of April’s peak, but cases outside NCR Plus increase 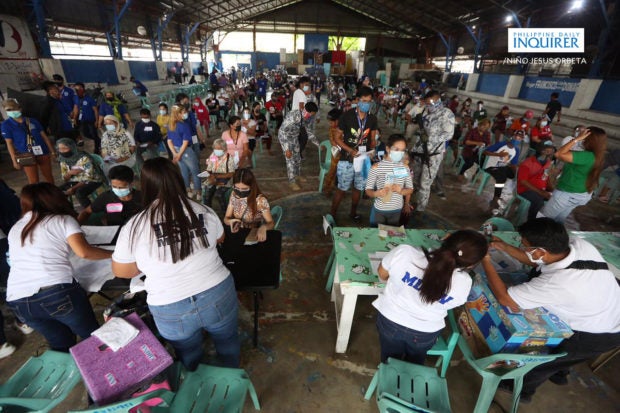 FILE PHOTO: Residents of Baseco in Tondo, Manila City, on Wednesday, April 7, 2021, line-up to get their financial assistance after the government extended the (ECQ) enhanced community quarantine from April 5-11, due to the surge of COVID-19 cases in the National Capital Region. Niño Jesus Orbeta/Philippine Daily Inquirer

MANILA, Philippines — The current number of new COVID-19 cases is now half the figures during the peak of infections in April, but cases outside the NCR Plus, mostly in Visayas and Mindanao, are increasing at a faster rate.

Dr. Alethea De Guzman, OIC-Director of the Department of Health’s (DOH) Epidemiology Bureau, said Thursday that an average of 5,130 new daily COVID-19 cases were recorded nationwide from May 19 to 25.

“It is half of the peak which is at 10,839,” she told an online media forum, citing data from April 9 to 15 when the country recorded the highest new daily cases.

She noted that the drop in nationwide cases started to slowdown in the middle of May.

The previous week’s case count was also lower than the average of 5,848 average infections logged from May 12 to 18. The goal, said De Guzman, is to bring the new cases to around 2,000 per day, similar to the numbers before the infection started to surge in March.

In Metro Manila and most of the rest of Luzon, cases continue to decline but at a slower pace.

De Guzman said the goal is to bring the daily cases down in Metro Manila to around 431 cases, or the average of cases recorded in the capital region from January to February.

The goal for these “Plus areas” is for cases to decrease to around 198 per day like what was reported from January to February.

After a consistent decrease in cases, De Guzman said the “Plus areas” are now exhibiting a plateau, while Laguna, specifically, has shown an upward trend around the first week of May.

But as additional coronavirus infections decrease overall, case spikes are now seen shifting to regions outside the NCR Plus—the “bubble” that covers Metro Manila and the neighboring provinces of Cavite, Laguna, Rizal and Bulacan.

According to De Guzman, Ilocos Region and Mimaropa have shown continuous increase in infections, while a continuous upward trend was observed for Visayas and Mindanao.

“In Visayas and Mindanao, nakikita natin na unti-unti na talagang tumataas (we saw the cases are really increasing). This is higher than the increase we saw and relayed last week,” she noted.

De Guzman said all regions in Visayas are showing an upward trend, with the fastest and highest increase observed in Western Visayas.

Meanwhile, all regions in Mindanao have also shown an upward trend, with Zamboanga Peninsula and Northern Mindanao having the highest spike in cases.

The country currently has 46,037 active cases of COVID-19, with additional 5,217 cases logged on Wednesday.

The government is aiming to achieve “population protection” against the severe effects of COVID-19 while waiting for more vaccines intended for achieving herd immunity.