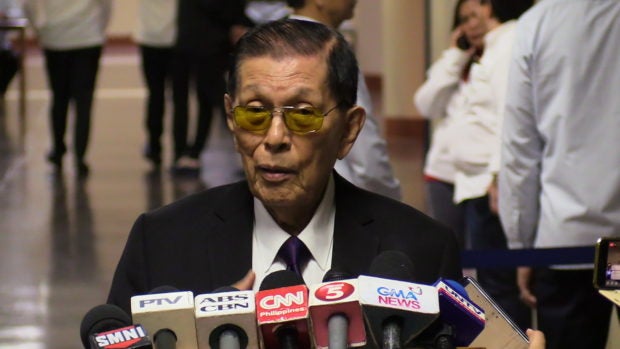 The Sandiganbayan’s Third Division ruled on May 19 that the testimony of lawyer Ryan Medrano—who was recruited by the Ombudsman to build its cases against Enrile and others—would not impair his right to confront the government.

Enrile previously argued that the testimony would interfere with his right to confrontation. He also said he would prefer Medrano appear in court and testify openly.

As a counterargument, the prosecution said that allowing testimony as evidence would speed up cross-examinations and other proceedings since the testimony is just meant to verify the validity of documents.

“Verily, right to confrontation is essentially a guarantee that a defendant may cross-examine the witnesses of the prosecution […] By allowing the use of the judicial affidavit of Atty. Medrano, Enrile will not be deprived of the opportunity to meet the witness face to face,” Sandiganbayan said in the resolution penned by Third Division member and Associate Justice Ronald Moreno.

“We additionally note that his right to confrontation is provided for under Rule 115, which provides that in all criminal prosecutions, the accused shall be entitled to confront and cross-examine the witnesses against him at the trial,” the court added.

The anti-graft court also said Medrano is not an eyewitness to the crime charged against Enrile, so he doesn’t need to be present in court.

The Sandiganbayan stressed that Medrano was not “privy to the documents requested by the Special Team 1 from various government agencies, and his testimony on this matter will be on the fact of the request made and identification of the documents submitted.”

Even so, the court ruled that Enrile’s legal team can still cross-examine Medrano on the witness stand.

“It is not lost on us that the guilt or innocence of an accused could depend largely on the testimony of an eyewitness, if found credible and convincing by the court,” the Third Division stated.

“In the present case, Atty. Medrano was not an eyewitness to the offense charged: he has no personal knowledge of the facts and circumstances constituting plunder,” it added.

Enrile’s case is one of the several pork barrel-related cases heard by Sandiganbayan, including the plunder charges against Senator Ramon “Bong” Revilla Jr. which have been dismissed for lack of sufficient evidence.

However, Napoles and Revilla’s aide Richard Cambe were convicted in the case.