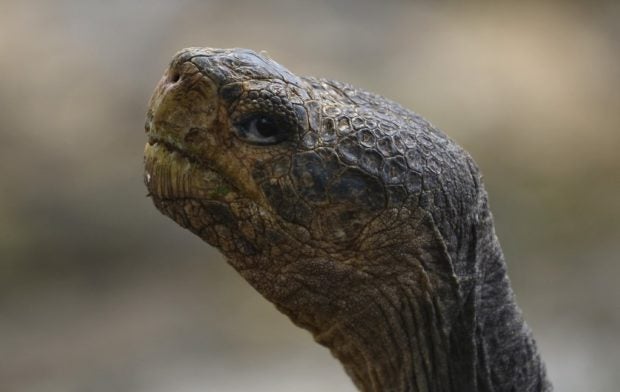 A giant tortoise is seen at a breeding center of Galapagos National Park in Puerto Ayora, Santa Cruz Island, in the Galapagos Islands, some 900 km off the coast of Ecuador in the Pacific Ocean, on April 15, 2021. Photo by Rodrigo BUENDIA / AFP

QUITO — Officials in Ecuador said Tuesday that genetic tests had confirmed that a turtle found in 2019 on the Galapagos island of Fernandina is a member a species thought to have gone extinct a century ago.

“It was believed to have gone extinct more than 100 years ago!” Environment Minister Gustavo Marique said in a statement.

“We have reconfirmed its existence. The tortoise of the species Chelonoidis phantasticus was found in #Galapagos”, he said.

Geneticists from Yale University in the United States compared DNA from the female turtle found two years ago with a sample extracted from a male of the species in 1906. The specimen, which is kept in a museum, had been collected during an expedition by the California Academy of Sciences.

The Chelonoidis phantasticus, typical of Fernandina Island, is one of the 15 species of giant tortoises native to the Galapagos archipelago. The Chelonoidis species of Santa Fe Island and the Abingdonii species of Pinta island have disappeared.

“This discovery undoubtedly renews our hope for the recovery of this species, in order to avoid a fate similar to that of Lonesome George,” said Danny Rueda, director of the Galapagos National Park, in a statement released by the environment ministry.

Lonesome George, a member of the species Chelonoidis abingdonii, died in 2012 without offspring after refusing to mate in captivity with females of related subspecies.

He became an emblem of the Galapagos, an archipelago located 1,000 kilometers (600 miles) off the coast of Ecuador and which takes its name from the gigantic turtles.