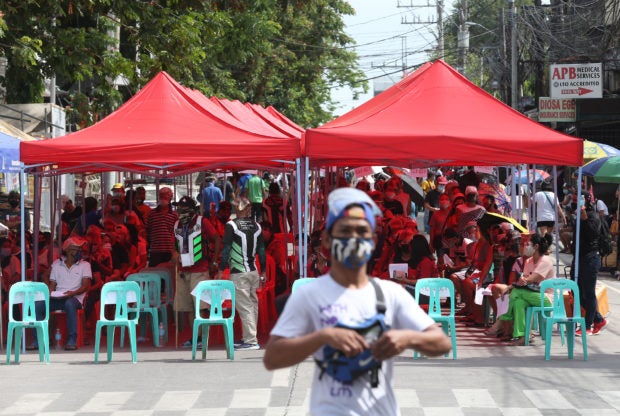 ‘AYUDA’ QUEUE Residents endure the heat outside a barangay hall in Quezon City while waiting for their turn to receive cash aid from the government. —NIÑO JESUS ORBETA

MANILA, Philippines—The debate is still raging in Congress over proposals to provide another lifeline, worth P1,000 each, to Filipinos who are still reeling from the impact of the COVID-19 pandemic after losing their jobs or taking hefty pay cuts.

Pending in two House committees—economic affairs and social services—is the proposed Bayanihan to Arise As One, or Bayanihan 3, which seeks to help the Philippines transition to a post-pandemic time.

Among its many provisions, however, one is drawing the most attention—another set of ayuda, or assistance, in the form of P1,000 per beneficiary.

The Bayanihan 3 bill, which would require an appropriation of P405.6 billion, is divided into three parts with bulk of the spending allotted to two more rounds of cash aid worth P1,000 per beneficiary, or P2,000 each at the end of the second round. 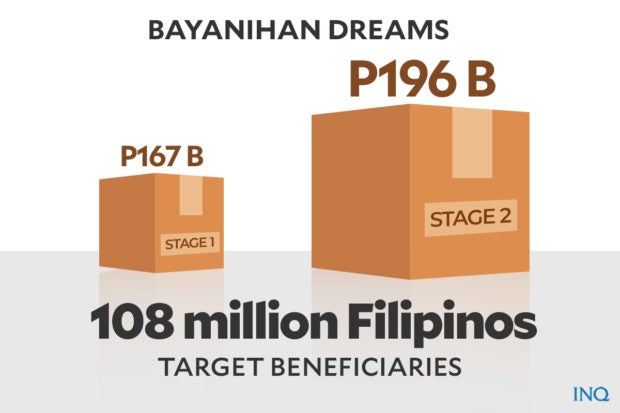 While legislators are deliberating, it might be worth our while to also take a closer look at the proposal.

With a P1,000 bill, you can buy over five days’ worth of a complete meal in a carinderia consisting of an order of a meat dish, vegetable dish and a cup of rice. But this is for a single person.

To treat your family to a fast-food meal, your P1,000 can buy eight pieces of chicken, four sides, four desserts, four rice servings and four small-sized drinks. But this is good for only one day.

Spent in the market for one day, P1,000 can buy these items, according to the party-list group Bayan Muna: 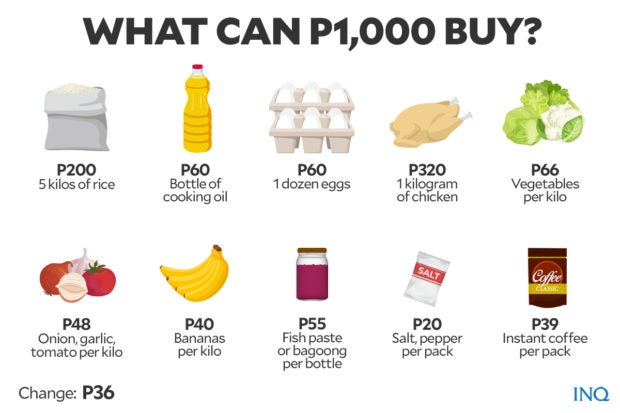 Other items that P1,000 can buy included: 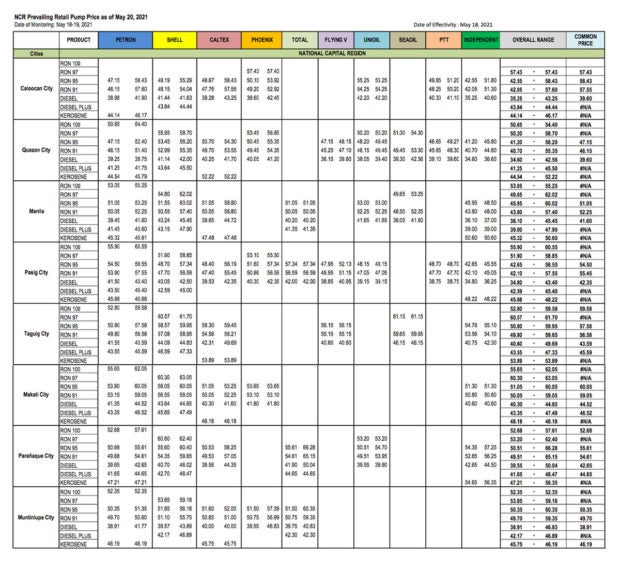 P1,000 will also be enough for a month’s worth of water bill if the money is spent solely on utilities. It won’t be enough for the average electricity or internet bill per month, though.

How the P1,000 ayuda can help is largely determined by the peso’s current purchasing power. 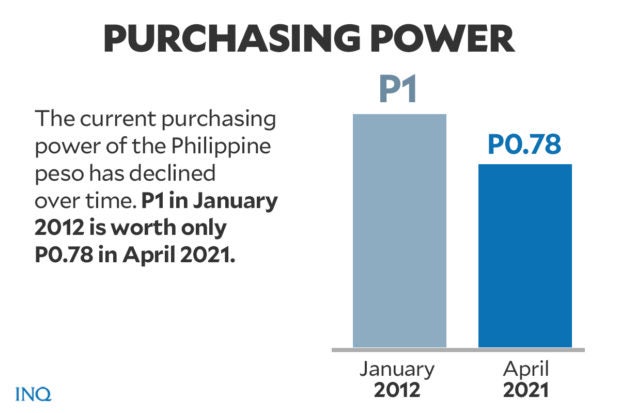 According to Speaker Lord Allan Velasco, one of the authors of the proposed Bayanihan 3, the P1,000 cash aid per tranche was studied by the House of Representatives’ economic team.

This was detailed when, in defense of the measure, Velasco explained that the set amount for cash aid would be more “equitable” compared to providing each household P10,000 as suggested by House Bill No. 8597, or “Ayuda Bill”, being pushed by Taguig-Pateros Rep. Alan Peter Cayetano.

“The studies of our economic team in Congress have shown that providing each person P1,000 is equitable. It’s more equitable because no Filipino will be left behind,” said Velasco in an interview.

The recently released P1,000 cash aid for 22.9 million beneficiaries in Metro Manila, Bulacan, Cavite, Laguna, and Rizal—the areas collectively known as the National Capital Region Plus that were placed on ECQ during a surge in COVID-19 cases—had been computed based on specific funding sources or availability of funds.

The financial cash aid is only a portion of the P405.6-billion funding sought for the proposed Bayanihan 3, which had been described as a “lifeline” by Albay Rep. Joey Salceda, chair of the House committee on ways and means. 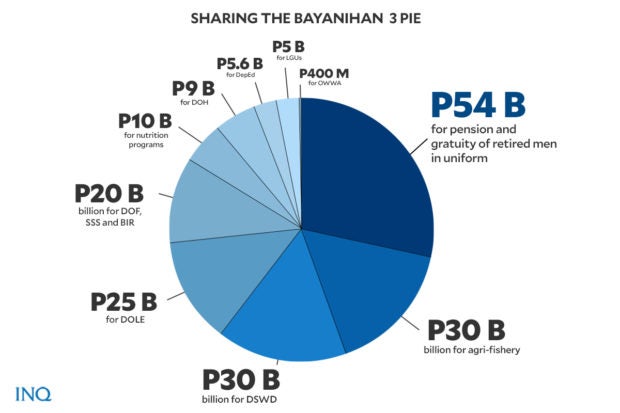 The bill provides P30 billion for the Department of Social Welfare and Development’s (DSWD) emergency assistance to households under its “assistance to individuals in crisis situations” program.

The Department of Finance (DOF), Social Security System (SSS), and the Bureau of Internal Revenue (BIR) will receive P20 billion for wage subsidies while P25 billion would be used as assistance to displaced workers under the programs of the Department of Labor and Employment (DOLE).

Another P30 billion would be given to the agri-fisheries sector while P10 billion was allocated for the government’s nutrition programs.

The Department of Health (DOH) would get P9 billion for its “Medical Assistance to Indigents Program” while P5 billion would be for the relief programs of various local government units.

A P54.6 billion allocation is proposed for the Pension and Gratuity Fund of retired soldiers and policemen.

The Department of Education (DepEd) will get P5.6 billion for its purchase of laptops for teachers, mobile and internet allowances, distance learning modules and N95 masks among others.

A total of P400 million was allocated to the Overseas Workers Welfare Administration (OWWA) for RT-PCR tests of seafarers and overseas Filipino workers.

According to a letter Salceda sent to Velasco, funding for Bayanihan 3 can come from:

READ: Bayanihan 3 ready to be tackled on House plenary floor

“They said they will be looking for the said funds so that we can start with Bayanihan 3,” Velasco said.

“Fingers crossed that this will be passed and funded because we really need to improve our economic standing and also, we need to help our countrymen,” he said. 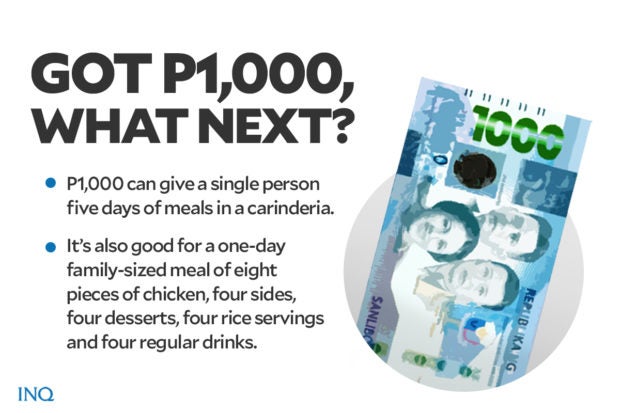 Following the approval of its substitute bill, the House late Monday (May 25) began its deliberation on House Bill No. 9411—the consolidated version of the proposed Bayanihan 3.

The plenary debate was attended by 300 lawmakers, 293 or 98 percent of whom signed as co-authors of the measure.

But funding remained to be the stickiest issue in the bill.

Bayanihan 3, split into three, would need:

Deputy Speaker Rufus Rodriguez took issue with at least one provision of the proposal which required beneficiaries of cash aid to be Filipinos residing for at least six months continuously in the Philippines.

This lay in contrast to a previous provision which stated that ayuda should be given to “each and every living Filipino” on the day that the proposed law is enacted.

“There is a limitation, which I believe will be discriminatory, especially for our dear Filipinos who are abroad working,” said Rodriguez, who represents Cagayan de Oro’s third district in the House.

AAMBIS-OWA party-list Rep. Sharon Garin, one of the key sponsors, said Rodriguez’s concerns had been considered and revisions would be made.

The nitpicking appeared to be necessary to avoid misunderstanding and confusion on who should receive the P1,000 aid. This happened in 2020 when delays marred the distribution of aid for 18 million families.

The lower chamber has five session days left to pass Bayanihan 3, a daunting task since the bill has not been certified as urgent by Malacanang.

Some House members, including Bayan Muna representatives and Cayetano, are still pushing for separate legislation, the Ayuda Bill, which would provide each Filipino family a one-time cash assistance of P10,000 or P1,500 per family member.

Proponents of Bayanihan 3 and Ayuda Bill, however, agree on one thing—the people need it.