Marinduque eyed as next ‘destination of choice’ 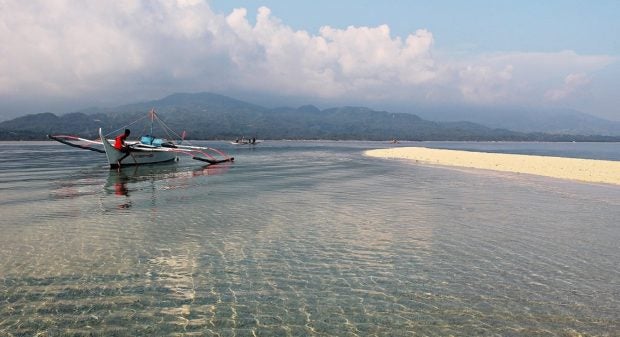 PRISTINE A refreshing swim at the sandbar of Gaspar Island, a tourist destination off the main island of Marinduque province, is enough to wash quarantine fatigue away. —CONTRIBUTED PHOTO

BOAC, Marinduque, Philippines — The island province of Marinduque is being eyed as the next “destination of choice” for those looking for a break from months of quarantines due to the coronavirus pandemic.

House Speaker Lord Allan Velasco, the representative of the province’s lone district, presented the tourism potentials of his hometown during the visit of Tourism Secretary Bernadette Romulo Puyat on the island on Friday.

Velasco said reopening Marinduque to leisure visitors would aid the tourism sector that suffered due to travel restrictions to curb the spread of COVID-19.

According to Provincial Tourism Officer Gerardo Jamilla, Marinduque’s tourism sector lost around P400 million in revenue in 2020 when travel bans were imposed. Marinduque has 17 tourism and hospitality establishments accredited by the Department of Tourism (DOT).

Marinduque, which is currently under the most relaxed modified general community quarantine, can attract visitors because it has open spaces and heritage and cultural spots that tourists are looking for, said Puyat, who was in the province to award certificates to beneficiaries of the cash assistance program of the DOT and the Department of Labor and Employment (DOLE).

The DOT-DOLE cash aid is given to tourism sector workers who lost their sources of livelihood due to lockdowns and travel bans. Among the beneficiaries in the province were tricycle drivers and the makers and sellers of souvenir items.

Velasco said he would coordinate with the DOT in the enforcement of health protocols to ensure that tourists who entered the province were not carriers of COVID-19.

The island has recorded only 404 COVID-19 cases since the pandemic struck last year, thanks to strict border checks. The province’s active infections as of May 21 was 14.

The festival was still held in this year’s Holy Week, from March 28 to April 3, but participants were limited due to health protocols.

The other attractions in Marinduque are its Heritage District, where the National Museum and ancestral houses like the Casa de don Emilio, are located; and the Luzon Datum of 1911, or Station Balanacan, a stone marker at the top of Mt. Mataas in Mogpog town, which is the primary geodetic reference or origin of all geological surveys in the Philippines.

The locals also take pride in their “putong,” or “tubong”—a ceremony where visitors are given crowns made of woven palm or bamboo and flowers and welcomed with songs by people clad in traditional clothing and carrying baskets of flowers, palm leaves and coins.

Marinduque is also known as the “butterfly capital of the Philippines” because of its butterfly farms in Boac and Gasan towns that provide 80 percent of the supply of butterflies imported to other countries. The butterflies are commonly released during celebrations such as weddings and birthdays, replacing doves.

They identified the provinces of Marinduque in Mimaropa along with Quezon and Laguna in Calabarzon and Albay in Bicol as the ones that will be initially featured in the circuit.

Puyat said the Mimaropa Farm Tourism Association would strengthen the farm tourism network in the region, and address the concerns of stakeholders in food security and farm tourism development.

The DOT is also developing a tourism circuit for diving and marine sports in Marinduque.

In October 2020, an exploratory dive assessment was conducted in Marinduque’s Tres Reyes Island, a popular dive spot where the wreckage of sunken Chinese merchant vessels can be found.