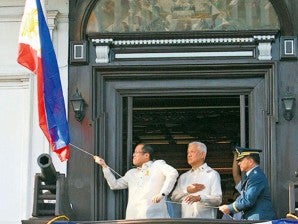 FREEDOM DAY RITES President Aquino leads the flag-raising ceremony in commemoration of the 113th anniversary of Philippine independence held at the Aguinaldo Shrine in Kawit, Cavite. He is joined by Cesar Aguinaldo Virata and the Armed Forces of the Philippines chief of staff, Gen. Eduardo Oban. The event celebrates the Declaration of Independence on June 12, 1898, by Gen. Emilio Aguinaldo and the Filipino revolutionary forces from the Spanish colonizers. RAFFY LERMA

KAWIT, Cavite—Hoisting the national flag in the same town where revolutionaries proclaimed Philippine independence 113 years ago, President Benigno Aquino III promised Filipinos a country free from corruption and a nation no longer like “a paper boat drowning in a sea of lies and anomalies.”

“The time to be ashamed as Filipinos is behind us,” Mr. Aquino said in an Independence Day speech from the balcony of Emilio Aguinaldo’s mansion here.

Now a shrine, it was where the young Aguinaldo as the country’s first President unfurled the Philippine flag in 1898 and proclaimed “Filipinas is for Filipinos,” signaling the colony’s separation from Spain.

Mr. Aquino led the flag ceremony, grasping the rope tethered to the flag and vigorously pulling, until the red-blue-and-yellow banner was unfurled at the top.

In his speech that was by turns serious and light, he trumpeted the reforms his administration had launched to give Filipinos a taste of “true freedom.” He lashed out at irregularities in the past administration.

At one point, underlining the urgency of reforms, he referred to the NBA basketball finals’ rivalry between the Dallas Mavericks and the Miami Heat.

“Whether you’re rooting for Dallas or Miami … we only have one sentiment as a Filipino: We don’t like the situation we’re in. There’s something better than this, and we want to achieve that.”

Mr. Aquino was the first president in 12 years to preside over Independence Day ceremonies in Kawit. Then President Joseph Estrada did the same in 1999. Generally in the past, Freedom Day rites had been held at Manila’s Rizal Park.

Mr. Aquino cited key reforms he said had been put in place in his 12 months in office to curb corruption and poverty, introduce electoral reforms and boost tourism.

He vowed “a new chapter” in Philippine history where justice, quality and dignity would reign.

He specifically mentioned the approval of the Government-Owned and -Controlled Corporations’ (GOCC) Governance Act, the synchronization of the Autonomous Region in Muslim Mindanao elections with the May 2013 elections, expansion of the conditional cash transfer program, and the implementation of the “pocket open skies policy.”

It sounded like a preview of his July 25 State of the Nation Address before Congress.

Mr. Aquino acknowledged that the country’s presidents had harped on the fight against poverty in their Independence Day speeches but said the people knew why this had not been won.

“As long as the corrupt are not wiped out, the poor will remain in our midst. If we want to free our country, we must free the government and ourselves from greed,” he said.

Mr. Aquino cited alleged irregularities in a jab at the past administration of President Gloria Macapagal-Arroyo.

“To make money, they would import twice the need and leave the rice to rot in warehouses,” he said.

“The generals would be sent off with truckloads of money, but the soldiers who were in the line of fire were shod in holes-filled boots. The whole country was made to ride in a paper boat eventually to drown in a sea of lies and anomalies.”

Mr. Aquino arrived at the shrine at around 6:30 a.m. and laid a wreath at Aguinaldo’s tomb amid a shower of rose petals from two helicopters.

At 7 a.m., he appeared at the balcony with former Prime Minister Cesar Virata, who is an Aguinaldo grandnephew, and Armed Forces Chief of Staff Gen. Eduardo Oban Jr.

In his speech, delivered in Filipino, the President said he would like to believe that all Filipinos agreed that “we had sown reforms” to put a stop to the cycle where “those fighting poverty are themselves the ones causing it.”

While he had come under fire over some decisions, Mr. Aquino said he did not mind criticisms so long as his efforts produced results.

“If others think it’s a mortal sin to court ladies even though I’m a bachelor, buy a second-hand car with my own money and sing out of tune, that’s not a problem with me,” he said.

“What’s important to me is the result, not earning brownie points, not making headlines and, most especially, not clinging to power,” he added, drawing loud applause and cheers.

Mr. Aquino conceded there was still much to be done to address the lack of classrooms, hospitals and the supply of rice.

But he also said the Philippines was gaining international recognition. Proof of this was Brunei’s request for assistance on branding products and Cambodia’s invitation for the Filipinos to set up businesses there, he said.

“The time to be ashamed as Filipinos is behind us. With our heads held high, we can say we are Filipinos, capable of being helped by our government, capable of helping our countrymen and the rest of the world,” he said.

The big crowd included war veterans, students, government employees and tourists. It was the biggest in years to attend the Independence Day rites in the town, according to Kawit Mayor Reynaldo Aguinaldo, a grandson of the revolutionary leader.

People waved flags fashioned from cut-up cardboard and paper. More flags hung on the walls and facades of some stores and residences.

Children too young to appreciate history mingled with grandparents who had seen and lived it.

High school sophomore Rica Mhay Quion, 13, who was on assignment for her school paper, said she was “happy and proud” to be part of the event. She said Independence Day for her meant enjoying her rights to express her opinion freely.

After Kawit, Mr. Aquino hosted in Malacañang a vin d’honneur for diplomats.

Former President Fidel V. Ramos and lawmakers were present, along with prominent businessmen.

Crowds at various parts of Rizal Park who came to attend the celebration totaled about 100,000, according to police.

Instead of tanks, heavy guns and trainer aircraft depicting the country’s modest military firepower, a fleet of yellow-colored electric tricycles rolled past Quirino Grandstand, capping a long parade of soldiers and policemen.

For Mr. Aquino, the parade of over 15 “e-trikes” was a symbol of the country’s freedom from the bondage of oil imports, and its commitment to a cleaner environment.

“When these e-trikes hit the road, it will help curb worsening pollution that destroys our environment and endangers our health,” he said in his Rizal Park speech.

He said the e-trike project, part of his Public-Private Partnership program, would put more food on the table of the country’s 3.5 million tricycle drivers.

The main stage was bedecked with indigenous fruits and vegetables—from green mangoes and bananas, to pineapples and string beans— and fish nets.

The extravagance that marked previous Independence Day parades at Rizal Park was replaced by a more humble but still festive show, kicked off by a 300-member choir from various government agencies clad in brightly hued Filipino costumes and singing the national anthem.

On the main float of the parade was a statue of a woman in a Filipino native dress holding a dove to symbolize independence.

Elsewhere, more than 100 laborers and activists accused Mr. Aquino of being a US puppet and demanded higher wages.

They attempted to march to the US Embassy, carrying an effigy of Mr. Aquino hanging on strings held by an image of Uncle Sam on a US aircraft carrier, but were blocked by riot police.

Nursing graduate Louvimin Cabanting, 21, was one of those who came to the job fair.

“I graduated last year but until now, I am still looking for a job,” said Cabanting, who came all the way from Isabela. “I am willing to take a job even if it is not related to my degree.”

Other graduates have the same problem.

Lovelyn Gregorio, 20, from Aklan, graduated with a degree in BS Home Technology. The job of a saleslady was on the list of positions she wanted to apply for. With reports from Jocelyn R. Uy, Maricris Irene V. Tamolang and AP