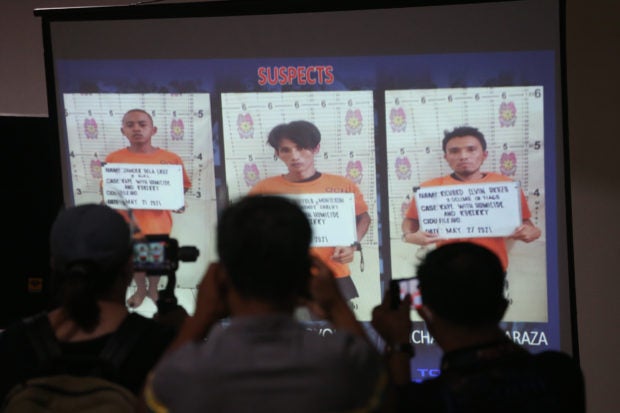 Charges have been filed against three suspects in the murder and alleged rape of a transgender man, which has been called a “hate crime” by an LGBTQ advocacy group.

Philippine National Police chief Gen. Guillermo Eleazar said on Sunday that the suspects in the death of Ebeng Mayor were identified by the Quezon City police as Zander Dela Cruz, Joel Loyola and Richard Elvin Araza.

The victim’s phone was recovered from the suspects who were charged on Saturday with rape with homicide and robbery in the city prosecutor’s office.

Despite the filing of a rape case and the suspects’ confession, the police were still waiting for the results of an autopsy to determine if Mayor had indeed been assaulted before he was killed.

An additional charge of illegal possession of firearms was also filed against Loyola.

“To the family of Ebeng, I know that we cannot bring [Mayor] back but with the PNP’s kept promise of bringing [his] killers to justice, we hope that this somehow lessens the pain of your loss,” Eleazar said in a statement.

After going missing for three days, Mayor was found dead on May 20 in an empty lot at Sitio Bakal, Barangay Bagong Silangan, Quezon City. A piece of wood had been thrust into the victim’s genitals.

Pursuing a lead from a witness who had identified Dela Cruz as the last person to be seen with the victim, the police questioned the suspect who happened to be Mayor’s close childhood friend.

He then confessed to the crime and identified his accomplices who were also arrested.

Based on the suspects’ testimonies, they went out drinking with the victim until the early morning of May 18.

On the way home, still drunk, Loyola said he punched Mayor until the latter lost consciousness. They then took the victim to a vacant lot where they assaulted him.

When Mayor came to, the three hit his head with a rock “to silence him,” according to Police Maj. Elmer Monsalve, city police investigation chief.

“Then after they took off [Mayor’s] clothes, not content with raping him, they then stuck a 12-inch wooden stick into his genitalia before leaving him there,” he said.

When Mayor’s body was discovered days later, the victim’s skull was crushed while his face was unrecognizable.

Monsalve said they believed the skull-bashing was the cause of Mayor’s death as Eleazar added that they had yet to get the results of the suspects’ drug tests.

According to LGBTQ advocacy group Bahaghari, all the evidence in the case “pointed to a hate crime.”

“Amid the pandemic, acts of discrimination are not at all reduced but intensified—from Duterte’s militaristic lockdown schemes to the release of murderer Pemberton from imprisonment—it is clear that this regime has no remorse for LGBTQ members,” Bahaghari said in a statement.

Justice for Mayor, the group added, could only happen through the immediate passage of a national legislation seeking to address the country’s violently discriminatory culture.

“As we seek justice for Ebeng, we also demand accountability from the current administration, headed by President Duterte, that has unwaveringly perpetuated the culture of violence against the LGBT+,” Bahaghari said. “We have not forgotten the scheming, flip-flopping position of Duterte on the Sogie (sexual orientation and gender identity and expression) equality bill that has languished for 21 years in Congress, his military lockdowns that have further enabled authorities to arrest, abuse and sexually violate members of the LGBT+ community,” it stressed.

Echoing Bahaghari’s sentiments, MMP called on Congress and for all city councils to pass antidiscrimination policies immediately, and for the public to “listen intently and amplify the voices of the trans community.”

In a statement, Quezon City Mayor Joy Belmonte “strongly denounced the atrocious and barbaric act against a member of the LGBT community” during Pride Month as she assured Mayor’s family of assistance.

“We encourage members of the LGBT sector who are experiencing violence and harassment to report to our hotlines for immediate action or seek refuge in our Kanlungan shelters if the need arises,” she said. INQ