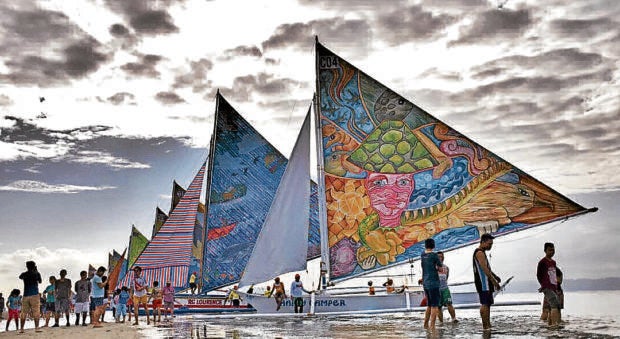 COLORS The Iloilo Paraw Regatta, considered Asia’s oldest and one of the world’s most colorful sailing festivals, will be held virtually on May 30 amid the COVID-19 pandemic. —ILOILO CITY PUBLIC INFORMATION OFFICE PHOTO

ILOILO CITY, Iloilo, Philippines — Another major festival here will be held online this year as this city struggles to contain a surge in COVID-19 cases.

The Iloilo Festivals Foundation Inc. (IFFI), which organizes the major festivals in the city, announced that the Iloilo Paraw Regatta will be held on May 30 on virtual platforms.

The Iloilo Paraw Regatta, the oldest sailing event in Asia, was canceled last year due to the pandemic.

Encouraged by the successful holding of the first Dinagyang Festival Digital last January, IFFI and the city government will stream a prerecorded video presentation on the festival.

“This is a manifestation of our strong commitment to continue celebrating our rich cultures and traditions despite being confronted with the challenges of this pandemic, because our identity as Ilonggos is truly worth celebrating,” IFFI said in a statement.

Joyce Ann Clavecillas, IFFI executive director, said there would be no actual sailing event for this year’s celebration but a video production that will feature among others the process of paraw sailing and interviews of those who previously participated in the festival.

The 49-year-old festival, which has drawn international acclaim and the distinction as the oldest and one of the most colorful sailing events in Asia, is usually held early summer after the Dinagyang Festival. It is famous for the colorful paraw that compete along the Iloilo Strait between Iloilo City and Guimaras Island.

Paraw are colorful, small and slim, double outrigger boats made of indigenous materials traditionally used by Ilonggos for transportation and fishing. The paraw has become an attraction of the yearly regatta that drew large numbers of participants and spectators.

The last time the festival was held in 2019, 41 paraw competed in three categories of the race depending on the length of the boat. Thousands traditionally lined up along the shoreline of Villa Arevalo District in this city to watch the race stretching 36.5 kilometers from this city to Guimaras.

This year, the city government has not only banned mass gatherings but has also asked the Inter-Agency Task Force for the Management of Emerging Infectious Diseases to revert the city’s status from modified general community quarantine, the most relaxed quarantine qualification, to the more restrictive modified enhanced community quarantine for at least 15 days “to prevent the collapse of our health-care system” amid a spike in cases.

Another crowd-drawing festival in Western Visayas that went online was the Manggahan Festival of Guimaras province, held from May 20 to May 22.

Guimaras Gov. Samuel Gumarin opted to cancel in-person events of the festival to prevent gatherings. The province recorded 488 cases since March last year. These included 70 active cases, 8 deaths and 410 recoveries as of Friday.