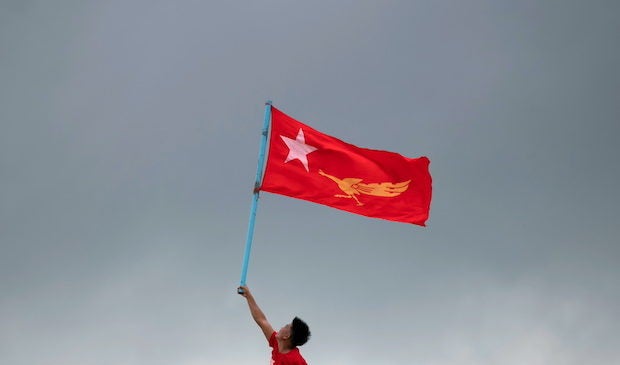 A supporter of National League for Democracy (NLD) party holds a flag on the top of a boat as he takes part in a rally ahead of a November 8 general election, amid the coronavirus disease (COVID-19) outbreak in the Yangon river, Myanmar, Oct. 28, 2020. (REUTERS)

Fighters opposed to Myanmar’s military junta fought with troops in the east of the country on Sunday and claimed to have killed more than 13 members of the security forces, captured four and razed a police station, local media said.

The fighting near the border of Southern Shan and Kayah states was the latest in a resurgence of conflict in parts of the Southeast Asian country since the coup that overthrew elected leader Aung San Suu Kyi.

Members of a People’s Defence Force, set up since the coup, told the Irrawaddy news service they had killed at least 13 members of the security forces when they overran a police station near the town of Mobye.

They told other media that even more died in a later clash 20 km (13 miles) to the south.

Reuters was unable to reach a junta spokesman for comment on the fighting. State television made no mention of the clash.

Videos shared on social media showed what appeared to be the uniformed bodies of security forces and smoke pouring from the destroyed police post and a police vehicle at Mobye.

Other pictures showed four men who were said to be police with their hands behind their backs, blindfolded with surgical masks.

The Progressive Karenni People Force, a network of local groups, said one fighter had been killed at Mobye.

The town is around 100 km (60 miles) east of the capital Naypyidaw and lies near territory held by some of the ethnic armed groups that have fought for greater autonomy for decades.

As fighting spread to Demoso to the south, the army brought reinforcements and armored vehicles, local media said. The Mizzima news service said thousands of people had fled after dozens of artillery rounds landed in their neighborhood.

An alliance of four ethnic armed groups which are also against the coup battled early on Sunday with security forces in Muse, one of the main crossings to China, Myanmar media said.

A national unity government set up underground by opponents of the coup announced a new flag and command structure for the People’s Defence Force, being set up to oppose the army.

While the junta is struggling with new conflicts on several fronts, it also faces daily protests and strikes that have paralyzed hospitals, schools and much private business.

More than 125,000 teachers – nearly a third of the total – have been suspended for joining a civil disobedience movement to oppose the coup, an official of the Myanmar Teachers’ Federation said.

At least 815 people have been killed by security forces since the coup, according to the Assistance Association for Political Prisoners activist group.

Junta leader Min Aung Hlaing said in comments broadcast on Saturday that 300 people had been killed, in addition to 47 police.

Protesters also demand the release of nearly 4,300 people who have been arrested since the coup, including Suu Kyi, 75.

Min Aung Hlaing said Suu Kyi was healthy and would soon appear in court. Her next hearing is on Monday on some of the various charges brought against her.

The army seized power claiming fraud in an election won by Suu Kyi’s party in November. Its accusations had been dismissed by the former electoral commission.

Some opponents of the coup have accused China of supporting the junta, which has been condemned by Western countries that have introduced limited sanctions. China has been milder in its approach and has said it seeks stability.

In further comments from an interview released by Hong Kong-based Phoenix Television on Sunday, Min Aung Hlaing sought to reassure Chinese businesses after some factories were set ablaze recently in the commercial capital Yangon.

“Our citizens are not being anti-China, but it’s the politics that cause the hatred,” he said.

The European Union on Sunday denounced a proposal by the election commission appointed by the junta to dissolve Suu Kyi’s National League for Democracy.