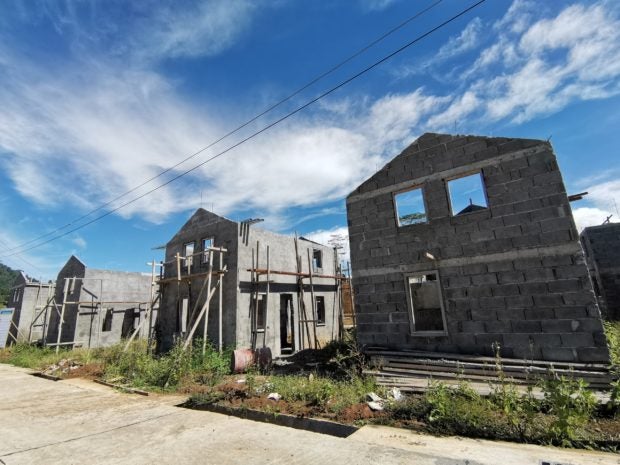 (FILE) Construction works in this UN-Habitat’s permanent shelter site in Barangay Dulay West, Marawi City was put on hold due to the COVID-19 pandemic. Some 109 units are targeted to be constructed here for the families from Marawi’s most affected areas who lost their homes because of the siege in 2017. DIVINA M. SUSON

MANILA, Philippines — Maranao leaders and other civil society organizations from Mindanao are calling on the national government to prioritize the reconstruction of war-torn Marawi City, four years after the city was laid to siege.

In a statement on Saturday, May 22 — a day before the anniversary of the Marawi Siege — the Marawi Advocacy Accompaniment (MAA) called on President Rodrigo Duterte’s administration to speed up the rebuilding of the city so that affected residents and displaced communities can return home.

“We, Maranao leaders and members of various civil society organizations along with our partner communities from Mindanao belonging to the network called Marawi Advocacy Accompaniment (MAA) today call on the Philippine government to accelerate its efforts on rebuilding the City of Marawi and prioritize the immediate, safe and dignified return of the displaced communities and provide just compensation for Marawi Siege victims,” MAA said in a statement.

“On the occasion of remembering those who have fallen during the siege four years ago, we once again stand in solidarity and mourn with the peoples of Marawi, who, up to this day, are enduring the profound and unceasing pains of that tragic incident that resulted to unnecessary loss of innocent lives, livelihood, displacement of thousands of families and reduced much of the once beautiful Marawi City to rubble,” it added.

It was on May 23, 2017, when the Maute group, which has expressed alliance with the Islamic State (IS), raided Marawi’s town center and occupied the city, bringing along several hostages with them.

Philippine forces successfully liberated the city by October of the same year, but it came at the cost of infrastructure being destroyed — from houses, business establishments, bridges, and other areas.

Four years since, a lot of residents have yet to return to their homes.  Previously, President Rodrigo Duterte said that the national government would no longer spend money for its rehabilitation, leaving it to rich businessmen.

According to MAA, which is composed of at least 21 organizations, several promises have been made by the government but only a few have materialized.

“A lot of promises have been made by the government and particularly by the Task Force Bangon Marawi, an inter-agency task force group tasked to facilitate Marawi’s rehabilitation, recovery, and reconstruction,” MAA said.

“Four years after the siege, most of the promises including providing just compensation for the damages of livelihood and properties of the affected families and the immediate return of the displaced back to Marawi remain unfulfilled. President Rodrigo Duterte’s promise saying that Marawi will rise as a prosperous city again remains invisible and cannot be felt on the ground,” it added.

Aside from merely rebuilding the city, the coalition is also looking for transparency about where government spending and donations for the city went.

“In particular, we demand transparency and accountability from the national government and the TFBM to make public all relevant and real-time information depicting the status, public spending, and other attendant issues on the Marawi rehabilitation since 2017,” MAA said.

“To achieve this, we urge the Philippine Congress to fast track and conduct public hearings in Marawi City on the assessment of the Marawi Rehabilitation by the mandated Senate and House committees,” it added.

In terms of funding, the Bangsamoro Autonomous Region has set aside P517 million for the rehabilitation of Marawi in 2021.  Meanwhile, the task force has set December 31 as the deadline for the city’s reconstruction.

“Thousands of Marawi IDPs remain in temporary shelter communities and others are living elsewhere in tightly packed communities and squalid conditions, which make them more vulnerable to the continuing onslaught of the COVID19 pandemic,” MAA said.

“It cannot be denied that the rehabilitation of Marawi City is now proceeding at a very slow pace despite the availability of government allocation for the reconstruction of Marawi. For us, the delays coupled with the neglect of the voices of communities in the city’s ‘ground zero’ contribute further not only to the trauma still being endured by the bakwits of the siege but also to the century-old narrative of marginalization, discrimination and exclusion and social deprivation in Mindanao,” he added.