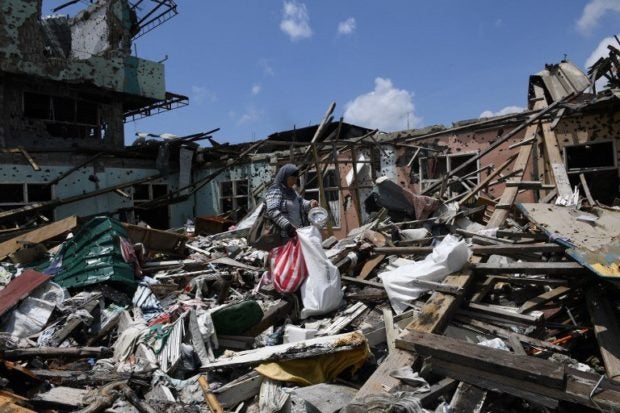 A resident collects salvageable belongings from her destroyed house during a visit to the main battle area in Marawi on April 1, 2018. After fleeing for their lives nearly a year earlier, residents of battle-scarred Marawi made their first visit back to dig through the rubble that was once their homes. (Photo TED ALJIBE / AFP)

The President issued this remark as he admitted that he would not be able to restore the Islamic City to its state before the Marawi siege that devastated the area.

“I don’t think that I should be spending for their buildings,” he said in a situation briefing at the provincial capitol here following the strong quake that hit parts of Luzon late Monday afternoon.

“The people there have a lot of money,” the President said in Filipino, referring to businessmen. “Every Maranao, there is a businessman. Those who are into shabu are included. They have money. The debate there is whether I would be also building the same kind that they lost. I don’t think I am ready for that.”

Despite these remarks, the President commended the Housing and Urban Development Coordinating Council (HUDCC) for the housing units in Marawi City.

“The thing I admired most was the speed that you built the houses in Marawi,’ he said. “But the informal settlers, the squatters so to speak, what Del Rosario did for them was really good. It’s sturdy, it can stand another whatever.”

He was referring to Eduardo del Rosario, HUDCC chair.

The President said the Marawi siege was a “man-made” calamity.

“It was bound to happen because of what they were doing there,” he said.

The government has allocated P67.99 billion for the rehabilitation of Marawi., which started in October 2018 after months of delay.

Homegrown Maute terrorists laid siege to Marawi on May 23, 2017, prompting a battle between Islamic State-inspired combatants and government troops for five months.