EXPLAINER: Your body, your choice: Why is bodily autonomy so important? | Inquirer News
Close
menu
search

EXPLAINER: Your body, your choice: Why is bodily autonomy so important?

MANILA, Philippines—The United Nations Population Fund (UNFPA) and the Philippine Commission on Population and Development (Popcom) on Wednesday (May 19) launched the latest State of the World Population (SWOP) report that highlights bodily autonomy, or a person’s right to decide what to do with his or her body.

It’s a rarely discussed issue but one that’s highly important, especially for women.

In the report “My Body is My Own: Claiming the Right to Autonomy and Self-Determination,” UNFPA detailed the situation of women in 104 countries, including the Philippines, in relation to bodily autonomy.

Before diving into UNFPA’s findings, we should first know more about this human right and why it is so important to uphold.

What is bodily autonomy?

According to UNFPA, bodily autonomy refers to women’s right to make independent decisions involving their bodies and ranging from reproductive health, when to have sex and when to have children.

“This includes when, whether or with whom to have sex,” said UNFPA on its website.

“It includes when, whether or with whom you want to become pregnant,” the UN agency. “It means the freedom to go to a doctor whenever you need one,” it added.

UNFPA, in its report, detailed that the concept of bodily autonomy in the context of the women empowerment movement, which first emerged in the 1970s.

Bodily autonomy as a human right was then adopted by the sexual and reproductive health and rights movement.

During the International Conference on Population and Development (ICPD) in 1994, the term “autonomy” was given another meaning.

Empowering women and giving them the right to exercise autonomy on their bodies has been linked with their political, social, economic or health status and was considered as a “highly important end in itself and is essential for the achievement of sustainable development.”

The word autonomy was paired with another, bodily, and has since become part of the lexicon of human rights advocates, activists and experts on sexuality, health, reproductive rights, sexual orientation, etc.

“While the term has become part of the vernacular of the feminist and sexual and reproductive health and rights movements, it continues to elude simple definition and easy measurement,” said UNFPA.

How can we measure bodily autonomy?

The first, SDG Indicator 5.6.1, measures the proportion of women aged 15 to 49 who make their own informed decisions on sexual relations, contraceptive use and reproductive health care.

It is based on survey responses to the following questions:
• Who usually makes decisions about health care for yourself?
• Who usually makes the decision on whether or not you should use contraception?
• Can you say no to your husband or partner if you do not want to have sexual intercourse?

“Only women who make their own decisions in all three of these areas are considered to have autonomy in reproductive health decision-making and to be empowered to exercise their reproductive rights,” said UNFPA.

The second, indicator 5.6.2, aims to track laws and regulations that guarantee full and equal access to women and men to sexual and reproductive health care, information and education.

It covers policies on maternity care, contraception and family planning, comprehensive sexuality education and information, and sexual health and wellbeing

“The indicator measures whether a supportive law exists and whether there are restrictions, such as age limitations or spousal permission requirements,” explained UNFPA.

While there are already ways to measure bodily autonomy, the UNFPA said these were just the starting points.

“We don’t yet have good measurements, but we know that loss of bodily autonomy is rampant around the world,” said Dr. Leila Joudane, UNFPA Philippines country representative, at an online press conference last Monday (May 17).

“These measurements are critical, but they offer only a glimpse into the bodily self-determination of people around the world,” Joudane said.

There are also several social and economic factors cited by UNFPA, which can influence a woman’s decision-making in connection to bodily autonomy.

These include:
• Knowledge on sexual and reproductive health and rights.
• Pressures or encouragement from the community. In some communities, norms and values may dictate a woman’s notion of bodily autonomy.

“Communities may pressure women to bear children and may generally perpetuate views that women should be submissive and passive in sexual relations,” said UNFPA.

Availability or lack of health system for women and girls

A woman’s inability to decide about contraception and reproductive health care can also be attributed to barriers in the health system.

Some issues included distance to nearest clinics and facilities, the lack of adolescent and youth responsive services, limited contraception methods or options.

On many occasions, men make most of the decisions—including those related to sexual and reproductive health issues which are often perceived as “women’s matters,” according to UNFPA.

“Gender norms typically assign women the sole responsibility for reproductive health but at the same time deny them decision-making power,” the agency continued.

Unfortunately, for many women around the world, educational attainment remains a factor in determining ability to refuse sex and decide about contraception and health care.

A separate study by UNFPA showed that “a woman who has less education than her husband or partner is more likely to be subjected to sexual violence than a woman whose education level is more or less equal to that of her husband.”

“Meanwhile, girls and women in the two lower wealth quintiles are also more likely to have experienced unwanted sexual relations,” it added.

Why is it important to discuss bodily autonomy?

Monitoring and discussing bodily autonomy help women and girls know more about their rights in deciding for their own bodies. It also encourages them to exercise choices about what happens to their bodies.

“Such individual empowerment likewise empowers families, communities, and the whole country,” she said.

While UNFP’s data cover only some countries, findings showed what the agency described as “an alarming picture of the state of bodily autonomy for millions of women and girls.”

The report said women and girls worldwide enjoy only 75 percent of legal rights being enjoyed by men even if policies or laws mandating gender equality are already in place in several countries.

“That means that little more than one in two women and girls has the power to decide whether and when to seek health care, including sexual and reproductive health services, whether to use contraception and whether and when to have sex with their partner or husband,” UNFPA explained.

In five Eastern Asia and Southeastern Asian countries, 76 percent of women and children said they enjoy the right to bodily autonomy.

In the Philippines, according to the presentation of UNFPA and POPCOM, there were encouraging numbers in the level of Filipino women’s decision-making on health care, sexual and reproductive health, and rights.

When to have sex? PH women showing independence but more needs to be done, say experts 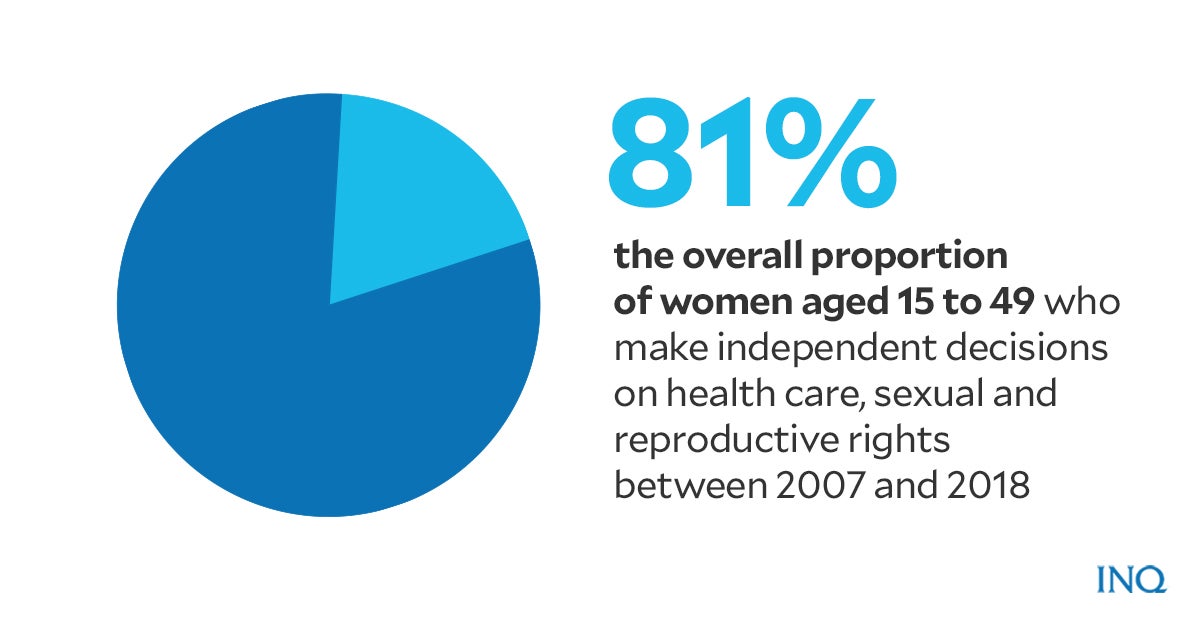 The overall proportion of Filipino women aged 15 to 49 who make independent decisions on health care, sexual and reproductive rights between 2007 and 2018 was 81 percent. 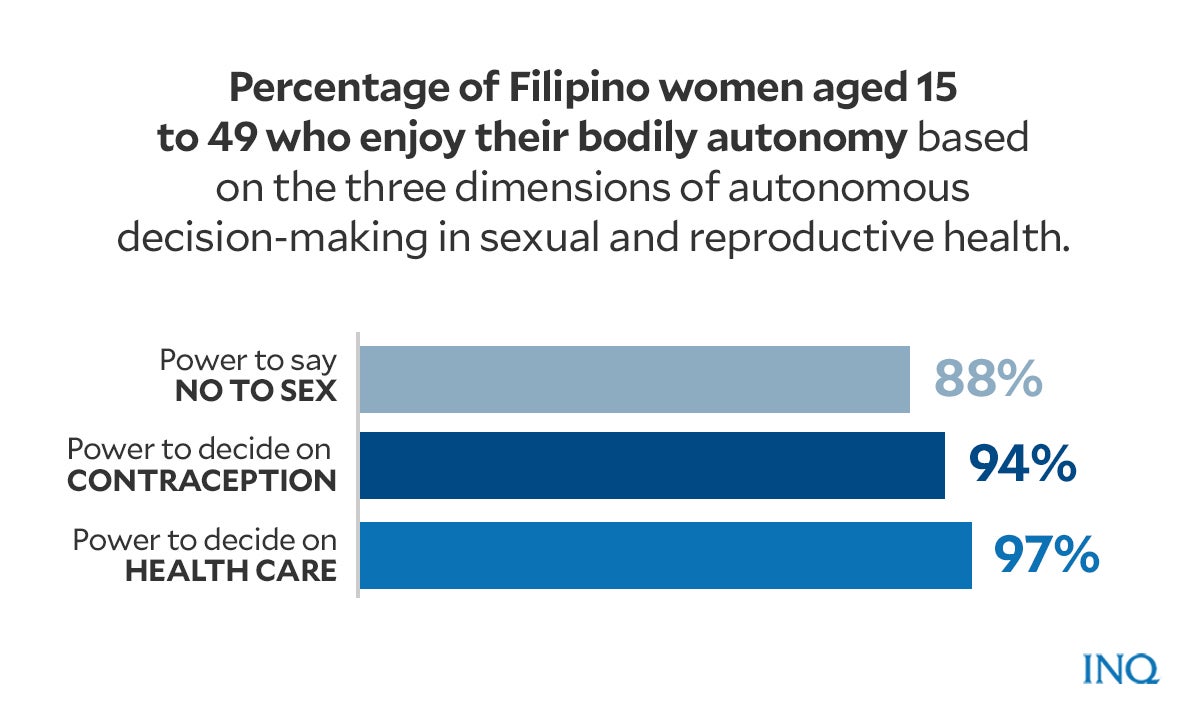 In terms of the country’s laws and regulations that help guarantee full and equal access to women and men aged 15 years and older to sexual and reproductive health care, information and education, the Philippines also recorded a decent score.

This was measured using the four topics and 13 components tracked under indicator 5.6.2 of the UN SDG.

For maternity care, the first component, the Philippines had a category average of 63 percent.

According to UNFP’s data, the country had sufficient laws that guarantee access to maternity care services while life-saving medicines and supplies are also available for some Filipino women.

However, while the country offers post-abortion care, abortion itself remains illegal in the country as it is still “highly stigmatized,” according to Guttmacher Instituteresearch, a research and policy organization.

The organization found in its 2013 report that at least 1,000 Filipino women die each year due to abortion complications.

“Tens of thousands of women are hospitalized each year for complications from unsafe abortion,” the report added.

The Philippines had a perfect record on sex education, according to UNFPA. It said the country had a 100 percent achievement on laws mandating sex education

The country’s category average for HIV and HPV was 90 percent.

The report found that HIV counseling and test services and care and treatment services are available and highly confidential.

Filipino women are increasingly making their own decisions about their bodies, when to have intercourse, get pregnant, or rear a child but policies and laws supporting this right needed enforcement, according to UNFPA and POPCOM. 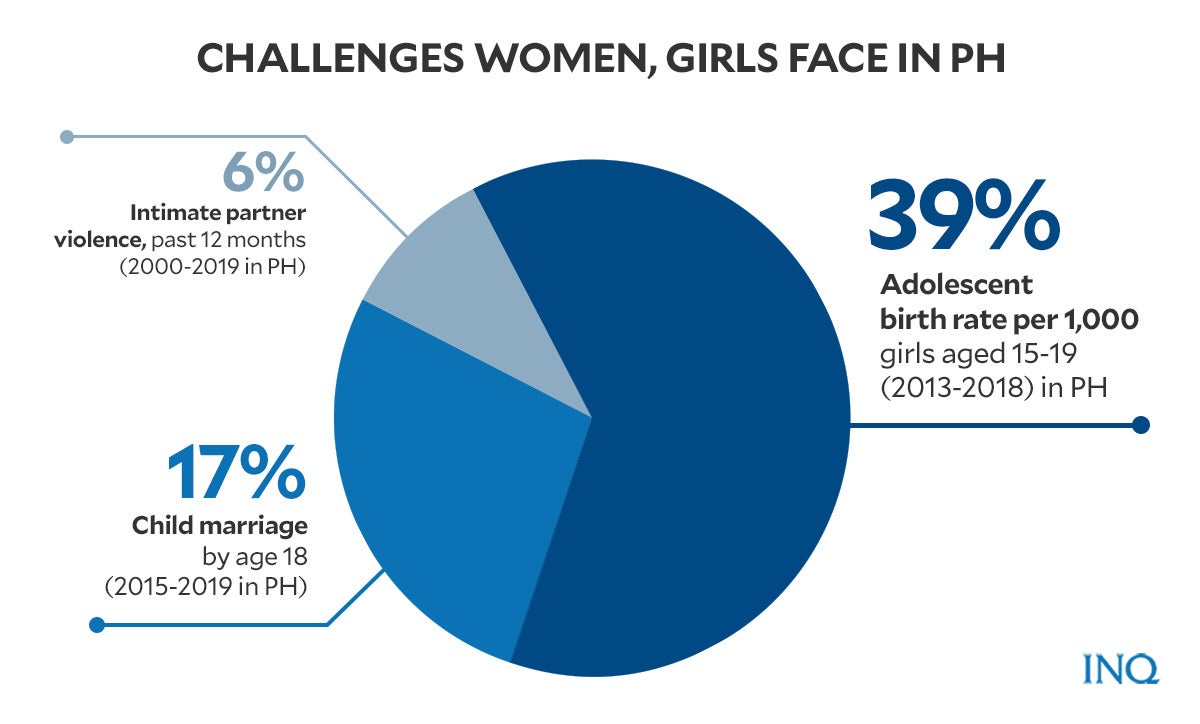 Dr. Juan Antonio A. Perez III, Popcom executive director, said to correct the anomaly, the government must support programs protecting the rights of young people to self-determination and bodily autonomy.
Such programs included sex education in all schools, which could also mean age-appropriate lessons for children to understand their bodies and sexuality at a young age.

Denial of bodily autonomy and integrity 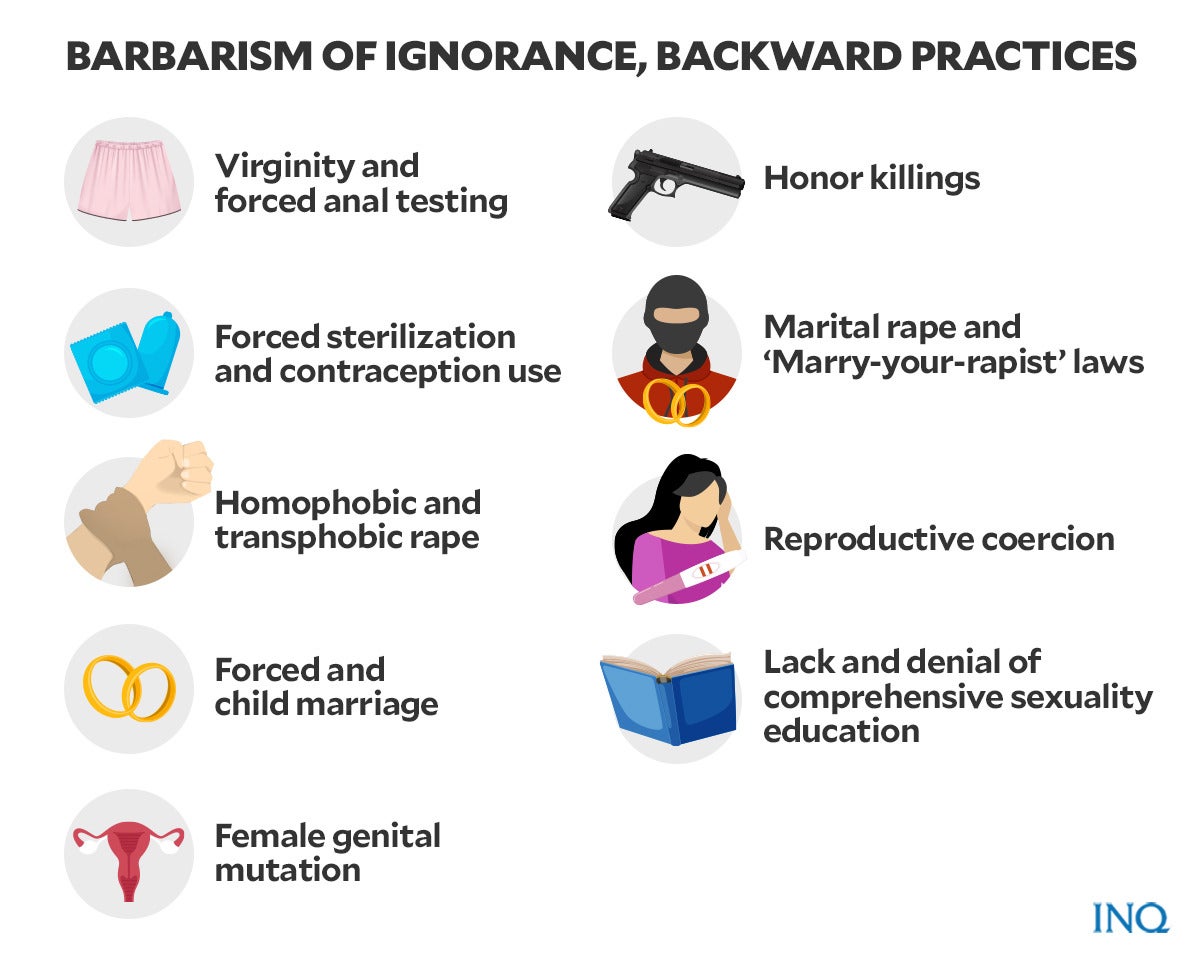 “[T]here are many bodily autonomy issues that remain hotly contested, which are unresolved by human rights agreements and international law, such as voluntary sex work, surrogacy and abortion,” UNFPA added.

“[T]hese issues are frequently driven underground, they are often poorly understood by researchers and lawmakers alike.”