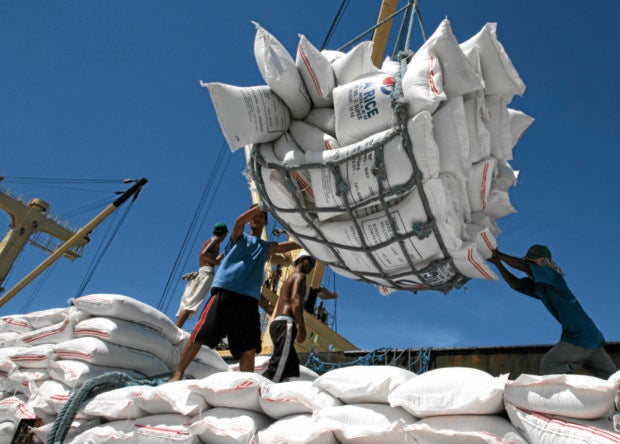 IMPORTED RICE/July 05, 2007
Workers unload sacks of rice from a Vietnam cargo ship in the port of Tabaco, Albay in this file photo taken in 2007. INQUIRER FILE PHOTO / EDWIN BACASMAS

MANILA, Philippines — At least five senators on Wednesday urged President Rodrigo Duterte to withdraw his executive order temporarily lowering tariffs on imported rice, saying it would only put more burden to local farmers and result in foregone revenues of up to P548 million.

Senate Minority Leader Franklin Drilon and Senators Nancy Binay, Leila De Lima, Risa Hontiveros, and Francis Pangilinan issued their call through the filing of Senate Resolution No. 726 seeking the withdrawal of Executive Order No. 135, which “provides for the temporary modification of the rates of import duty on rice.”

Under the executive order, the most favored nation (MFN) tariff rates for rice will be temporarily reduced to 35 percent, from 40 percent for in-quota imports and 50 percent for out-quota imports, according to Malacañang.

“There is no reasonable and sufficient basis to reduce the tariff rates on rice and it will only cause more burden to our local rice farmers, further increase our import dependency, and cost the government millions in foregone revenues,” the senators said in their resolution.

The senators cited farmers’ groups, the Tariff Commission, and the Philippine Statistics Authority’s reports as bases for their resolution.

According to them, the Federation of Free Farmers (FFF) questioned the basis of lowering rice import tariffs mainly because Agriculture Secretary William Dar had previously stated that “there is an ample supply of rice” in the country following a “record harvest” in 2020.

Further, the resolution cited FFF estimates, which showed that the lowered tariffs could cost the government around P548 million in foregone revenues.

This is higher than the estimates of the country’s Tariff Commission, which said that the government would lose at least P60 million in revenue per year if the MFN tariff rates on rice are reduced to 35 percent.

“These programs depend on the excess of the 10-billion-peso tariff revenues collected from rice importation,” the senators said.