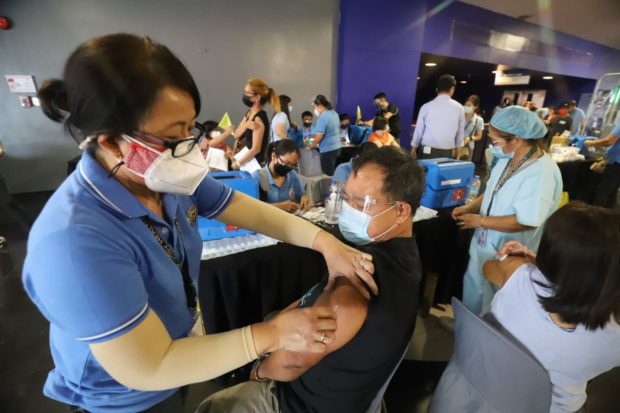 RUSH JAB The Iloilo City government ramps up its vaccination of elderly residents and those with medical conditions at a vaccination center at SM City Iloilo amid a renewed surge in COVID-19 cases. —PHOTO COURTESY OF OFFICE OF THE ILOILO CITY MAYOR

ILOILO CITY, Iloilo, Philippines — A renewed surge in coronavirus cases has prompted local officials to appeal to the national task force overseeing the government’s pandemic response to raise the quarantine category of this city.

The surge in cases is also being experienced on neighboring Guimaras Island, prompting the cancellation of in-person events and activities of the scaled-down Manggahan Festival set this week.

In a May 16 letter to Defense Secretary Delfin Lorenzana, chief of the National Task Force Against COVID-19, Iloilo City Mayor Jerry Treñas asked for the change of the city’s status from modified general community quarantine (MGCQ) to the more restrictive modified enhanced community quarantine (MECQ) for at least 15 days “to prevent the collapse of our health-care system and to arrest the continuous rise in COVID-19 infections.”

Treñas said placing the city under MECQ is “critical in lowering [virus] transmissions in the locality which will eventually decongest our hospitals experiencing critical [intensive care unit] occupancy rates.”

The mayor issued an executive order on Monday that put the city under MECQ but later clarified that it still needed approval from the Inter-Agency Task Force for the Management of Emerging Infectious Diseases.

From April to May, the daily average rate of cases increased by 209.1 percent, city health records showed.

The Department of Health recorded a two-week growth rate of 80 percent as of May 13, Treñas said in his letter.

The mayor said hospitals in the city were already “overwhelmed” with a rising number of infected personnel.

The majority of the 10 hospitals in the city have stopped admitting patients due to a surge in cases.

Treñas said the city government would provide assistance to residents and sectors that would be affected by the heightened restrictions.

In an executive order issued on Monday, Guimaras Gov. Samuel Gumarin ordered the cancellation of the in-person activities of Manggahan Festival, the province’s biggest event set on May 20 to May 22 due to the rising number of COVID-19 cases.

He said 24 cases were recorded in the province on May 16 alone, bringing the total number of cases to 466. These include 49 active cases, 409 recoveries and eight deaths.

The festival was already toned down to mostly virtual activities and was intended to help revive the island’s tourism industry, one of its main economic drivers.

In Ilocos Sur, Candon City in Ilocos Sur province was placed on MECQ for two weeks starting Sunday (May 16) to curb the spread of the coronavirus.

In an executive order on May 15, Gov. Ryan Singson said the change in quarantine status was necessary since the threat of COVID-19 remained high in the province as the bulk of the cases was coming from Candon, which was under the less stringent general community quarantine (GCQ) since May 6.

He said the spread of the virus in the city had to be contained before the growing number of infections could overwhelm Ilocos Sur’s health system.

In Pampanga, the provincial government has reopened its borders starting May 16 as it also began easing other quarantine restrictions. The province remains on MGCQ.

Non-Pampanga residents would no longer be required to present negative reverse transcription-polymerase chain reaction (RT-PCR) test results to enter the province, said Gov. Dennis Pineda in an executive order on May 15.

—WITH REPORTS FROM JOHN MICHAEL MUGAS AND JUN MALIG