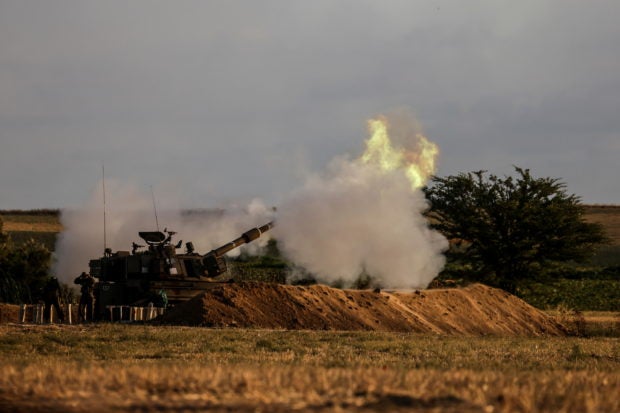 Israeli soldiers stand by an artillery unit as it fires near the border between Israel and the Gaza strip, on the Israeli side May 17, 2021. REUTERS/Amir Cohen

WASHINGTON — President Joe Biden’s administration approved the potential sale of $735 million in precision-guided weapons to Israel, and congressional sources said on Monday that U.S. lawmakers were not expected to object to the deal despite violence between Israel and Palestinian militants.

Three congressional aides said Congress was officially notified of the intended commercial sale on May 5, as part of the regular review process before major foreign weapons sales agreements can go ahead.

The sale was first reported by the Washington Post.

The sale of Joint Direct Attack Munitions, or JDAMs, made by Boeing Co, was considered routine at the time, before the start last week of the fiercest hostilities in the region in years.

There were no objections at the time by the Democratic and Republican leaders of the congressional foreign affairs committees that review such sales, aides said.

Asked for comment, a State Department spokesperson noted that the department is restricted under federal law and regulations from publicly commenting on or confirming details of licensing activity related to direct commercial sales like the JDAMs agreement.

“We remain deeply concerned about the current violence and are working towards achieving a sustainable calm,” the spokesperson said.

Strong support for Israel is a core value for both Democratic and Republican members of the U.S. Congress, despite calls from a few of the most progressive Democrats to take a tougher stance against the government of Israeli President Benjamin Netanyahu.

U.S. law allows Congress to object to weapons sales, but it is unlikely to do so in this case. Because Israel is among a handful of countries whose military deals are approved under an expedited process, the typical window for objecting will close before lawmakers can pass a resolution of disapproval, even if they were inclined to.

Read Next
Under pressure, Biden works for ceasefire in Israel-Gaza violence
EDITORS' PICK
Ahead of ONE: Full Blast II, Mongkolpetch warns Elias Mahmoudi: ‘Watch out for my fists’
G7 rivals China with grand infrastructure plan
Rare earth metals at the heart of China’s rivalry with US, Europe
PNP, PDEA destroy P25.8M worth of marijuana in Kalinga
Alex Eala wins Grand Slam on Independence Day: ‘I hope I made my contribution to the country’
Kai Sotto continues to inspire Filipinos by sharing his passions and stories with Smart Prepaid
MOST READ
Groups slam Duterte ‘surrender’ to China
Chel Diokno, Bro. Eddie, Ate Vi decline 1Sambayan 2022 poll nomination
G7 rivals China with grand infrastructure plan
1Sambayan bares nominees for president, vice president in 2022 polls
Don't miss out on the latest news and information.