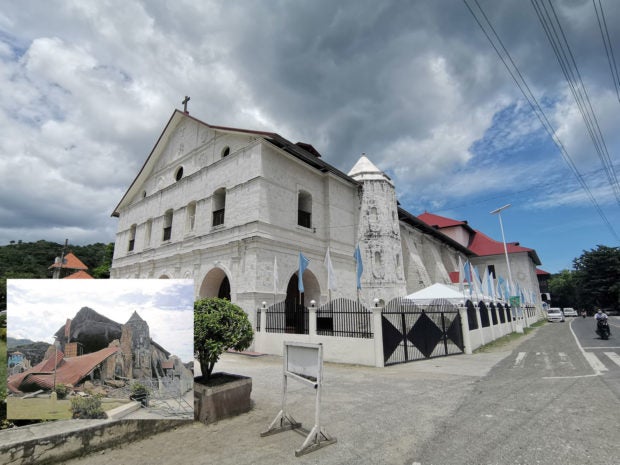 NOW OPEN The restored San Pedro Apostol Parish Church in Loboc town, Bohol, reopens to the public on Sunday, seven years after it was severely damaged by the 7.2-magnitude earthquake on Oct. 15, 2013, as shown in this photo (inset) taken by Agence-France Presse. —LEO UDTOHAN

LOBOC, Bohol, Philippines — Marites Jala was emotional when she attended Mass at this town’s historic church on Sunday.

“The church really looks like the original,” said the 46-year-old resident of Barangay Villaflor of this municipality in Bohol province, as she gazed upon the majestic ceiling paintings of the San Pedro Apostol Parish Church, popularly known as the Loboc church.

Jala and the people of Loboc patiently waited for the day that they could attend Mass again inside the centuries-old church, which was severely damaged by the 7.2-magnitude earthquake that hit Bohol on Oct. 15, 2013.

“When the earthquake happened, the first thought that came into my mind was the state of Bohol’s churches. [While many of them were destroyed], our faith was not shaken. We know God will rebuild it in His time, and that came true today,” said a teary-eyed Jala.

The Loboc church was formally reopened to the faithful on May 16, seven years after the strong quake that destroyed churches in Bohol.

The National Museum of the Philippines (NMP), which supervised Loboc church’s restoration, turned over the church to the Diocese of Tagbilaran, which has ecclesiastical jurisdiction over the town.

Many of the materials that were retrieved and documented after the earthquake were either reused or restored.

“Now, we can marvel at this heritage asset once more and continue our efforts in preserving our faith and heritage for generations to come,” said the prelate, as he led the church’s dedication.

The centuries-old church, including its bell tower, sustained significant damage during the 2013 earthquake.

The church’s condition worsened when, a year later, the church was struck by another natural disaster after the Loboc River overflowed and flooded the town at the height of Typhoon “Seniang” (international name: Jangmi).

It was the worst flood to hit Loboc in 70 years, officials said.

The restoration process, which started in December 2017, began with the retrieval of items buried in the rubble.

The NMP constructed a storage facility to temporarily store the recovered artifacts, most of which have been restored including the church’s side and main “retablos” (altar pieces), and its ceiling paintings.

The church and its connecting convent, which was built in 1734, is one of the oldest structures in Bohol.

In 2001, it was declared a national cultural treasure and was the first cultural property of the NMP in Bohol.

Restoration of the Loboc church was financed and supervised by the NMP with additional funds from the Tourism Infrastructure and Enterprise Zone Authority.

Both churches, which were also destroyed during the 2013 earthquake, were likewise declared as national cultural treasures by the NMP. INQ