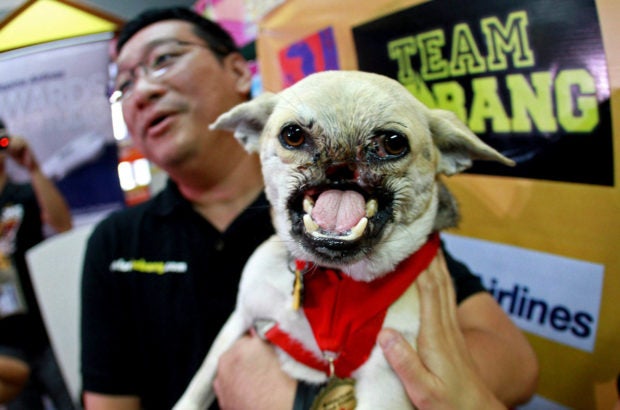 NEWLEASE ON LIFE In this 2013 photo, veterinarian Anton Lim presents Kabang to reporters after the dog’s surgery in the United States. —INQUIRER FILE PHOTO

ZAMBOANGA CITY, Zamboanga del Sur—Kabang, the dog who lost her snout for saving two girls from being run over by a motorcycle about 10 years ago, breathed her last around 7 p.m., Monday, May 17 on her bed in Barangay Pasonanca here.

Dr. Anton Lim, the veterinarian who has been taking care of the dog since the death of the dog’s owner in 2015, broke the news to the Inquirer on Monday after he found Kabang unmoving on her bed.

“(I’m v)ery sad to inform you that I found Kabang dead in her bed with no prior sign,” said Lim. “It happened between 4 and 7 p.m.,” he said. “I last played with her at 4 p.m. and was supposed to feed her again her dinner. I found her motionless with no external sign or prior sickness. She died in her sleep,” Lim said in a message to the Inquirer.

Kabang was 13, or an equivalent of 91 years for humans.

A street dog owned by Rudy Bunggal, Kabang earned her fame after she saved Bunggal’s daughter and a cousin when the two girls were about to cross the street along Nuñez Extension here in December 2011.

The dog jumped over the two girls to take the impact from a speeding motorcycle which could have hit the children, saving the girls and losing her snout, as a result.

Her heroic action drew wide attention from people all over the country; among them, Dr. Lim, who went the extra mile to save the dog by bringing her to the United States for a snout reconstruction.

Lim said Kabang was a voracious eater up to the last moment of her life. Before her death, she finished her dog meal at lunch time.

“We are very sad about her loss. We will temporarily bury her in our backyard until the dog’s statue shall have been completed. Then, we will transfer her there,” Lim said, referring to the dog statue that the family had decided to erect at the Roseller T. Lim Boulevard here, locally known as Cawa-Cawa Boulevard.

Read Next
Solon wants gov’t to ensure fire-hit PGH returns to normal in days, not months
EDITORS' PICK
TeaM Energy pushes development programs to help in pandemic rebound
Piolo Pascual: The Ultimate Heartthrob continues to level up
Vaccine supply is ‘biggest problem,’ Binay says after Duterte’s threat to arrest vaccine ‘skeptics’
Pangilinan says science-based solution is needed vs COVID, not fear based or arrest
Want to help local farmers? Shop small and eat Real Food
Vaccine profits: Making a killing from a killer virus
MOST READ
Duterte-Duterte tandem possible but ‘winnability is another question’ — Binay
Vaccine profits: Making a killing from a killer virus
Sharon Cuneta on living in the US: ‘Nagagawa ko lahat ng normal na bagay’
Pangilinan says LP making efforts to reach out to Lacson, Isko, others
Don't miss out on the latest news and information.