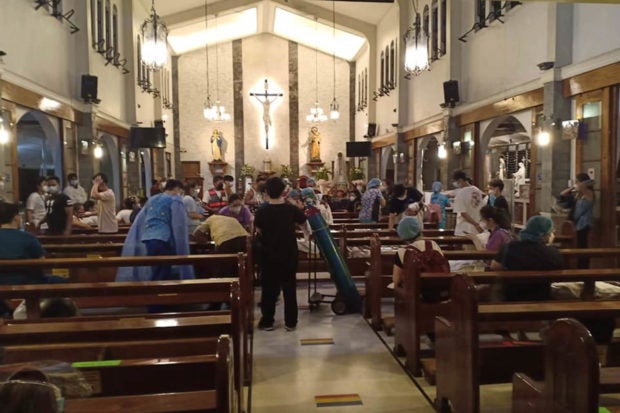 UNSCATHED The Immaculate Conception chapel at the Philippine General Hospital offers comfort and relief for newborn babies and pediatric patients who were evacuated out of their rooms when a fire broke out at a building for paying patients in the wee hours of Sunday. —CONTRIBUTED PHOTO FROMFR. MARLITO OCON, SJ

MANILA, Philippines — Patients sat on wheelchairs and hospital beds, parents took over pews with their newborn babies, and workers lugged oxygen tanks elsewhere at the chapel of the Philippine General Hospital (PGH) in Manila early Sunday, all anxiously waiting for the fire that hit a building of the state-owned medical center to die down so they could safely return to their rooms.

At a time when the country is yet to contain the COVID-19 pandemic, a fire of still undetermined cause struck the building for paying patients at PGH, one of the Philippines’ only three coronavirus referral hospitals, around 1 a.m. on Sunday.

The fire was declared out nearly five hours later at 5:41 a.m. without any reports of injuries or casualties, the Bureau of Fire Protection (BFP) said. It placed damage to property at P300,000.

Within minutes after the fire broke out, the Immaculate Conception Chapel was packed with 35 newborn babies—mostly premature or whose mothers had very difficult pregnancies and deliveries—as their mothers and attending nurses lugged behind them oxygen tanks.

Ocon told the Inquirer that some nurses also resorted to manually pumping oxygen for their patients who had difficulty breathing and were hurriedly evacuated from their rooms at the pay hospital.

Out of the 35 patients, he said, one had just gotten a heart surgery.

“Our nurses and doctors are excellent here. Even if some of the newborn patients were intubated or needed oxygen to breathe, they all survived. All 35 patients [evacuated at the chapel] survived the fire,” Ocon said.

The PGH Chapel, located approximately 300 meters from the Central Block, served as a temporary evacuation center for newborn babies confined at the state-run hospital’s Nicu (neonatal intensive care unit), as well as elderly patients on wheelchairs.

According to Ocon, the smoke from the fire also choked the fourth floor of the pay hospital building, which houses Nicu patients, as well as the fifth, sixth and seventh floors that were occupied by COVID and non-COVID patients. COVID patients are admitted at the right side of these floors to separate them from nonvirus patients, he said.

The donated bags of breastmilk for the hospital’s newborn babies that were placed inside a refrigerator in the building almost did not survive the fire, Ocon recalled.

But a porter who was assigned at the pay hospital building had courageously crawled through available space to retrieve the bags, which could spell a baby’s survival.

“He was not even permitted by the security guards and firemen to enter, but still he crawled. He crawled just to get the donated breast milk. Otherwise, the children will be hungry,” Ocon said.

Most of the patients, along with their parents and watchers, were safely returned to their rooms after the smoke was cleared, the priest added.

The incident set off calls for donations for the urgent repair of PGH, with one senator describing the early morning scene of hospital staff wheeling outpatients, including infants in incubators and intubated persons, as a “double calamity.” (See related story on this page.)

“That is the only way to describe the plight of COVID-19 patients ending up as fire victims,” Sen. Joel Villanueva said in a statement. “This is why it’s important to start immediately the repair of PGH because thousands of our people rely on it for their health care,” he added.

Malacañang on Sunday said it was “saddened” by the incident.

Jonas del Rosario, PGH spokesperson, assured the public that COVID-19 operations were not directly affected, but he said the hospital would have to temporarily stop admitting new patients in its wards as officials were still assessing the extent of the damage.

“We have a lot of patients who were transferred from the pay hospital to the emergency room. So our ER will remain closed starting [Sunday],” Del Rosario said in a radio interview.

Dr. Gerardo Legaspi, PGH director, posted on his Facebook account that the fire started “in the ceiling of our OR Supply and Autoclave (Orsa) Room and later involved the inflammable linen and drapes.”

“It was contained within the area but thick smoke soon engulfed the adjoining floors and diffused into the pavilions,” Legaspi said.

While the cause of the fire had yet to be ascertained, Del Rosario cited a witness’ account that it started at the linen area of the Orsa. The witness reportedly tried to put it out with a fire extinguisher but upon noticing that the blaze was spreading, the staff “had no choice but to leave and protect themselves.”

At least 16 newborn babies were transferred from PGH’s Nicu to two other hospitals in Manila, according to the city public information office.

Other pediatric patients were moved by their guardians to other private hospitals, Del Rosario said.

OR operations would remain suspended until Monday, he said.

Outpay swabbing services at PGH will resume on Monday after it was temporarily suspended, officials said.

At present, PGH has 148 COVID-19 patients, while its COVID-19 bed capacity remains at 250. PGH is one of the only three coronavirus referral hospitals in the country. The others are Dr. Jose N. Rodriguez Memorial Hospital (formerly Tala Hospital) in Caloocan City and the Lung Center of the Philippines in Quezon City.

While the fire spread in the building housing paying patients, Del Rosario said those with COVID-19 were immediately evacuated to the charity ward’s intensive care unit, and others at the obstetrics admitting section.

“We secured them [in these areas] and made sure that they will not be mixed with nonCOVID patients,” he said.

In another interview later in the afternoon, Del Rosario said paying patients—both COVID and non-COVID—were gradually allowed to return to their wards that were already clear of smoke.

—WITH REPORTS FROM DJ YAP, JEROME ANING AND REUTERS