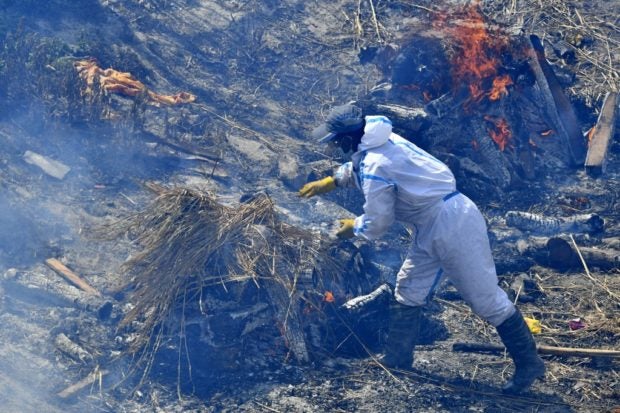 Crematorium workers wearing PPE suits (Personal Protection Equipment) are seen amid the burning funeral pyres of Covid-19 coronavirus fatalities at a cremation ground in Kathmandu on May 14, 2021. Photo by PRAKASH MATHEMA / AFP

KATHMANDU — Five people suffocated in a Nepal hospital after oxygen ran out this week, just the latest victims of a vicious Covid surge that risks devastating the impoverished country and its ill-equipped healthcare system.

Daily new cases have risen 60-fold since April 1 and nearly a thousand people have died in the past 10 days, according to official figures which, as in neighboring India, are seen as under-reporting the scale of the virus.

The mountainous country of almost 30 million is now seeing severe cases flood hospitals as oxygen cylinders empty faster than they can be refilled and almost half of those tested return positive.

In the capital Kathmandu, several hospitals have said they can no longer admit new patients, turning away desperate relatives looking for beds for infected loved ones.

And Nepal’s prime minister now faces accusations that he missed a window of opportunity to stem the virus’ spread — allowing public gatherings and international travel even as cases soared to devastating levels across the border in India.

Samir Kumar Adhikari, chief of the Health Ministry’s Heath Emergency Operation Centre, said that the country is now in a “crisis situation”.

“If even 20 percent of the thousands in home isolation require hospital beds and care, it might reach a point where we will not be able to handle it,” he said.

The five Covid patients who died this week were being treated in the intensive care unit of a hospital in Rupandehi in southern Nepal.

“Our vehicles were queueing with cylinders to refill at three different refilling stations, but none were able to do so on time,” Bishnu Gautam, a doctor at the Lumbini Provincial Hospital, told AFP.

“All oxygen plants in Kathmandu are operating 24 hours and supplying oxygen in their full capacity. We can refill only 8,000 cylinders a day but demand is much higher.”

Nepal has one of the world’s worst-funded health systems, with the number of doctors per capita lower even than India.

The reasons for the surge in cases is similar to its huge neighbor — Nepal began recording a rise in cases in early April, a month after India, but the government continued to allow, even organize, large religious festivals and political gatherings.

Many Nepalis attended India’s Kumbh Mela festival alongside millions of local Hindu devotees — including the former king and queen who were later hospitalized after testing positive.

Indian travelers also flocked to Nepal to fly on elsewhere as the world restricted flights from India, until a ban was enforced.

Former health minister Gagan Thapa, now an opposition lawmaker, said that Nepal had wasted two crucial months in which it could have stemmed the outbreak.

“No matter the mistakes we made earlier, if we had used that window of opportunity, the damages would be much less than what we are seeing right now,” Thapa said.

Prime Minister KP Sharma Oli has faced fierce criticism over his handling of the pandemic.

As cases rose, he suggested gargling with guava leaves would cure the virus — topping his comments last year that spices would strengthen Nepalis’ immune systems.

Oli on Monday lost a confidence vote in parliament — due more to political infighting rather than the pandemic — and talks are now on to form a new government.

The Nepal Medical Association has appealed to politicians to “postpone their political calculations” and prioritize saving lives.

Nepal typically relies on India for most of its medical supplies, but its powerful neighbor is now busy fighting its own crisis.

In March New Delhi effectively froze exports of vaccines to focus on its own needs and has only delivered half of what Nepal had ordered.

Only 2.4 million shots from India and China have been administered, and just over one percent of people have received both doses.

That’s even worse than India, which has fully vaccinated around three percent of its population.

Nepal has now turned to China for help, this week sending an aircraft to pick up the first 400 out of a promised 20,000 oxygen cylinders and other supplies.

Nepalis abroad have been rallying to get urgent help for the country, with #vaccines4nepal trending on Twitter on Wednesday as US senators discussed aid to the country.

“We have a similar burden to India but less capacity to cope,” she told AFP.

“(It) is important for international community to realize the vulnerability of Nepal differently from India.”

On Monday, the government made a formal call on development partners for support, prioritizing oxygen, ICU equipment and vaccines.

“If the help that we are seeking does not arrive, we will head towards a terrible situation which will be very difficult for us to manage,” health ministry official Adhikari said.