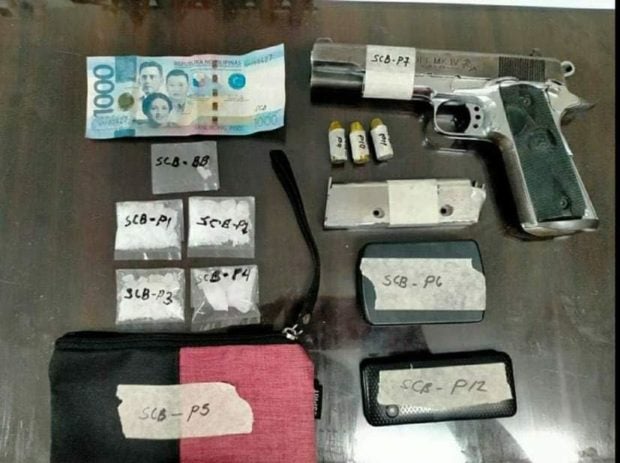 The pieces of evidence allegedly confiscated from the former policeman. (Photo from the PRO3-PIO)

MABALACAT CITY, Pampanga – A gun and five sachets of shabu (crystal meth) were seized from a former member of the Pampanga police force during a Saturday (May 15) drug bust in Floridabalanca town.

Renan Manacmul, 43, was absent without leave before he was formally removed from the rolls of the Floridablanca Police Office.

Manacmul was immediately arrested after he allegedly sold P1,000 worth of shabu to an undercover policeman, according to a statement issued by Police Brig. Gen. Valeriano De Leon, Central Luzon police director.

Confiscated from the suspect were a loaded caliber .45 Colt pistol and five plastic sachets containing the shabu.

De Leon said the suspect will be charged for violating provisions of Republic Act 9165 known as the Comprehensive Dangerous Drugs Act of 2002.