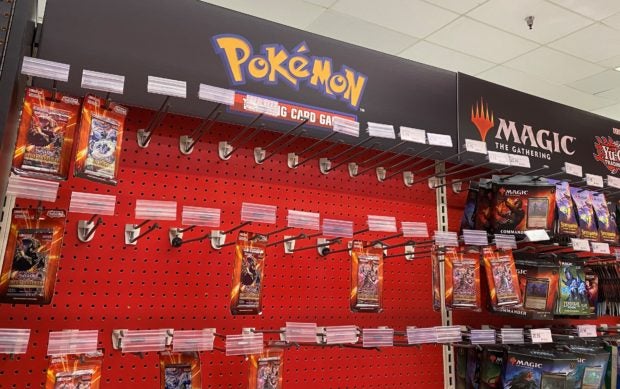 Pokemon trading cards are displayed on shelves at a local Target store in Los Angeles, California on May 14, 2021. – US retail giant Target announced Friday it was suspending sales of Pokemon and other trading cards amid concerns that a buying frenzy is threatening the safety of shoppers and staff. (Photo by Chris DELMAS / AFP)

Washington, United States — US retail giant Target announced Friday it was suspending sales of Pokemon and other trading cards amid concerns that a buying frenzy is threatening the safety of shoppers and staff.

In an incident last Friday that US media said was likely behind the decision, four men attacked a 35-year-old shopper in the parking lot of a Wisconsin Target over his trading cards.

“The safety of our guests and our team is our top priority,” Target, which has more than 1,800 locations nationwide, said in a statement.

The company didn’t refer specifically to the Wisconsin altercation, which ended when the victim reportedly pulled out a gun, although no shots were fired.

“Out of an abundance of caution, we’ve decided to temporarily suspend the sale of MLB, NFL, NBA, and Pokemon trading cards within our stores, effective May 14,” Target added.

Popular in schoolyards since its release in 1996, the Pokemon trading card game has been enjoying a resurgence in popularity, boosted by pandemic restrictions keeping people at home, according to the Marketplace website.

Images showing cereal boxes ripped open on the shelves and long lines of fans lining up at dawn in search of cards at Target stores have been proliferating on social media.

The price spike is being fueled in part by publicity from social media stars such as 26-year-old YouTuber Logan Paul, who bragged about spending nearly $2 million on Pokemon cards in a video.

In response to the frenzy, Target last month began limiting sales to one pack daily per customer.

The cards will still be available online, the company said.