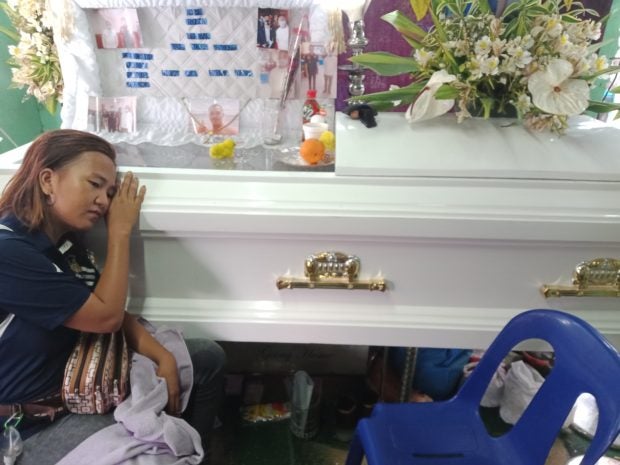 Nerisza Frianela grieves of the death of her partner, urban group leader Jeffrey Ariz and cries for justice over what she described as “senseless” killing. The wake for Ariz is being held at their house in BFP Housing, Barangay Cacarong, Pandi town. (Photo by Carmela Reyes-Estrope)

PANDI, Bulacan –– The family of the slain leader of an urban poor group in Bulacan has appealed to authorities to speed up the investigation as the assailants remained at large.

Nerisza Frianela, 29, said her partner Jeffrey Ariz, 35, had worked for the government by persuading members of militant Kalipunan ng Damayang Mahihirap (Kadamay) to break away from the group.

Kadamay occupied a government housing project here in 2017 and Ariz cut had ties with the activist group since then.

He eventually led those who also left the group and put up “Pagkakaisa ng Mamamayan Tungo sa Kaayusan (PMTK),” which they described as a “pro-government” urban poor organization.

On May 7, unidentified men shot dead Ariz as he was constructing a fence in Angeles City, Pampanga province, where he headed a 60-man team from Pandi that was hired to work at a disputed property.

Nerisza said her husband was trying to earn for their family only to be killed “senselessly.”

Soledad Ariz-Peralta, the victim’s aunt who raised him, said they were angered by allegations that Ariz was a leader of a squad of goons.

“Growing up poor, he always loved to help others, especially his fellow poor. That had been his role. It is unfair to judge him as such,” Peralta told the Inquirer