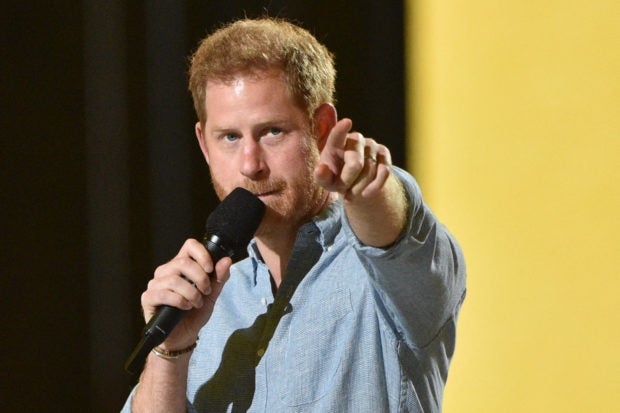 LOS ANGELES – Prince Harry moved his wife and son to California to break a family cycle of “pain and suffering” after realizing his father Prince Charles “treated me the way he was treated,” he said in an interview released Thursday.

The remarks comes in the wake of Harry and Meghan’s explosive television interview with Oprah Winfrey, in which they raised allegations of racism in the royal family, and said Charles had cut them off financially.

Harry told “Armchair Expert” podcast host Dax Shephard that while he did not blame his father, he had resolved to avoid making the same mistakes with his own children.

“When it comes to parenting, if I’ve experienced some form of pain or suffering because of the pain or suffering that perhaps my father or my parents had suffered, I’m going to make sure that I break that cycle,” said Harry.

“There’s a lot of genetic pain and suffering that gets passed on anyway. And as parents we should be doing the most we can to try and say, “You know what? That happened to me, I’m going to make sure that doesn’t happen to you,” he added.

Harry said that once he began thinking about his father’s own upbringing, he came to realize that the Prince of Wales had not had it easy, being brought up as a royal.

“So that means that he’s treated me the way that he was treated. Which means, ‘how can I change that for my own kids?’ And well, here I am,” the prince told Shephard.

“I’ve now moved my whole family to the US.”

The allegations made in Harry and Meghan’s earlier interview with Winfrey in March have plunged the monarchy into its biggest crisis since the death of William and Harry’s mother, Princess Diana, in 1997.

Harry and Winfrey will collaborate again for mental health documentary series “The Me You Can’t See” premiering May 21 on Apple TV+.

Promoting that forthcoming series, Harry told Shepherd he had realized that he did not want his royal duties in his early 20s, in part because of “what it did to my mom.”

“The three major times I felt completely helpless — one when I was a kid in the back of the car with my mom being chased by paparazzi, two was in Afghanistan in an Apache helicopter, and then the third one was with my wife,” he said.

Harry and Meghan now live in Montecito, around an hour north of Los Angeles, and are expecting a daughter.

Read Next
U.S. administers 266.6 million doses of COVID-19 vaccines – CDC
EDITORS' PICK
Alex Eala wins Grand Slam on Independence Day: ‘I hope I made my contribution to the country’
COLUMN: Making the republic work
1Sambayan names 6 choices to pit vs Duterte’s annointed in 2022
COVID situation still ‘very fragile’ due to surge in regions – DOH
Ahead of ONE: Full Blast II, Mongkolpetch warns Elias Mahmoudi: ‘Watch out for my fists’
Kai Sotto continues to inspire Filipinos by sharing his passions and stories with Smart Prepaid
MOST READ
1Sambayan bares nominees for president, vice president in 2022 polls
1Sambayan names 6 choices to pit vs Duterte’s anointed in 2022
Nancy, Isko asked to pull out of 1Sambayan nomination, says Carpio
PH to launch biggest satellite in 2023
Don't miss out on the latest news and information.