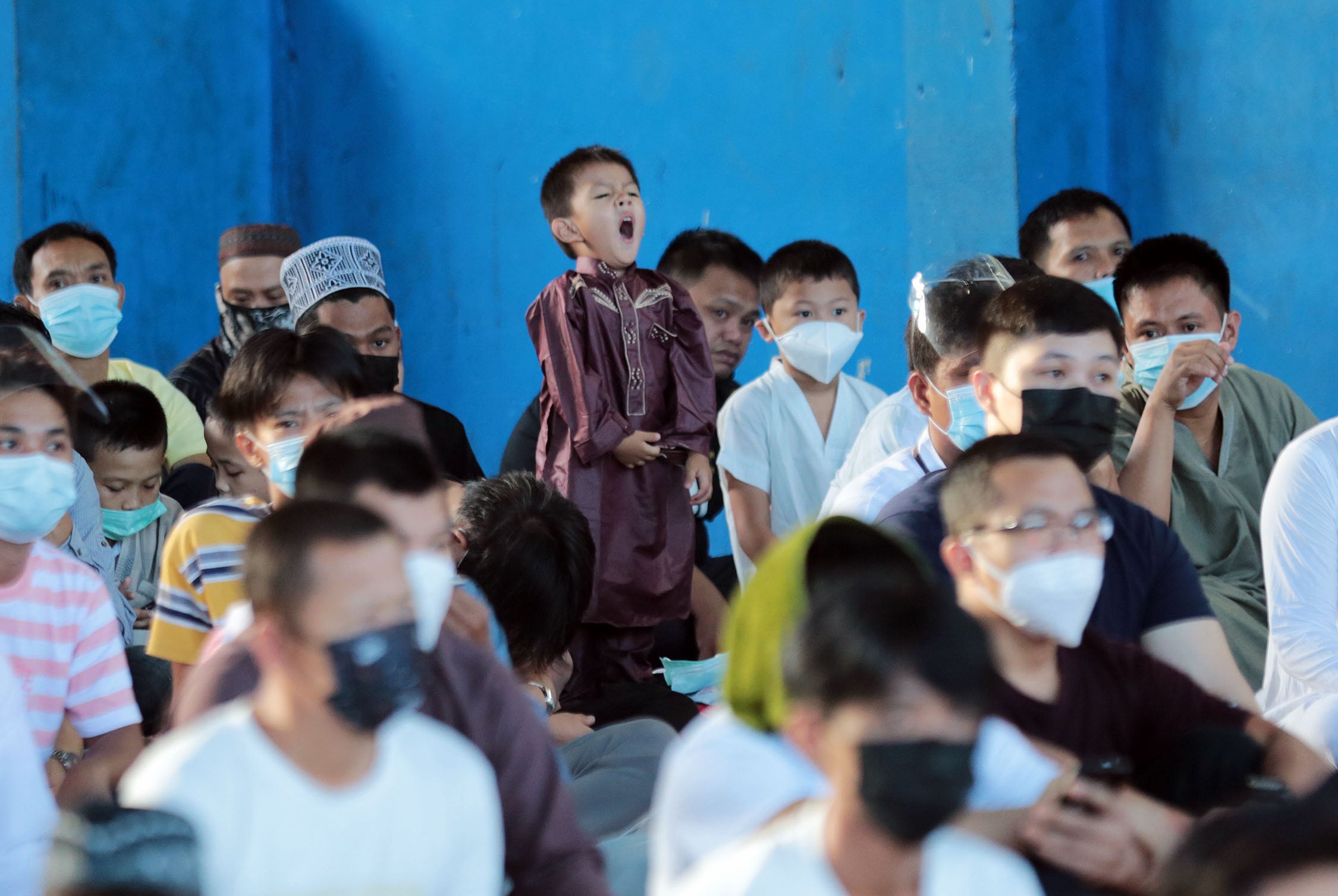 BREAKING THE FAST A boy lets out a yawn as his Muslim elders wait for prayers to start at a covered court in Barangay Commonwealth, Quezon City, to mark Eid al-Fitr on Thursday. Also known as the Festival of Breaking the Fast, the holiday celebrated by the Islamic world marks the end of the holy month of Ramadan. Among Filipino Muslims, the occasion has been subdued in the last two years due to the pandemic. —GRIG C. MONTEGRANDE

COTABATO CITY — Muslims in Mindanao celebrated the feast of Eid al-Fitr, which marks the end of the holy month of Ramadan, in a subdued manner on Thursday largely due to restrictions on mass gathering which prevented the holding of congregational prayers.

The feast, declared a national holiday by President Rodrigo Duterte, customarily brings families together in worship and merriment after undergoing a 30-day fasting in which they abstain from taking food and water from sunrise to sundown.“The celebration under the new normal is hard. We were restricted when we were supposed to be free and jubilant as we ended 30 days of fasting. But no protest; our religious leaders said so. We obey the protocols as we obey God,” Kamentang Kamarudin, 46, told the Inquirer as he prepared for early morning prayer.

In place of the congregation, Kamarudin and his family joined an Eid morning prayer streamed live on social media.

Another faithful complained that this year’s Eid is “somehow meaningless. “Our tradition of public assembly prayer is supposed to be in a very festive mode where families and relatives unite,” Kagi Maulana Hashim of Cotabato City said. “Even families at odds due to rido publicly forgive [each other], embrace and hug each other in celebration of Eid al-Fitr. But now, we cannot do it.”

“For everybody’s safety, me and my family [just] obey,” he told the Inquirer.

This is the second time since the pandemic began last year that Eid celebrations have been redrawn by the pandemic. This year, Cotabato City, the seat of the Bangsamoro Autonomous Region in Muslim Mindanao, has banned congregational prayers. The same ban was imposed in Lanao del Sur, where the Islamic City of Marawi is located.

Last year, the Bangsamoro Darul Ifta (House of Islamic Opinion) issued a decree suspending public gatherings, including congregational prayers in open spaces due to the pandemic.

While many Muslims silently opposed the non-holding of congregational prayers, many families in Maguindanao province welcomed the end of the fasting month in an even more difficult situation—breaking fast in evacuation centers.

At least 4,160 families or about 20,800 individuals have been displaced by hostilities between gunmen of Islamic State-linked Bangsamoro Islamic Freedom Fighters (BIFF) and the government, and are temporarily staying in various evacuation sites.

“Celebrating Eid is tough due to COVID restrictions and even more difficult when you are in a cramped evacuation center,” said Bainon Odin, one of the evacuees in Datu Paglas, Maguindanao, which was occupied by BIFF gunmen for six hours on May 8.

Odin remained in the evacuation center as sporadic skirmishes between government forces and the BIFF continued.

In Zamboanga City, which is on modified enhanced community quarantine, mosques are only allowed to take in worshipers up to 10 percent of capacity.

In Iligan City, which hosts a large number of evacuees from Marawi City since 2017, mass gatherings were also heavily regulated, although this has not prevented worshipers from congregating for Eid prayers.

Capt. Royre Tabuclin, chief of Iligan City Police Station 4, said they were not strictly limiting the movement of people, especially in the Eid al-Fitr celebration, although they deployed personnel to mosques for security and monitoring of health protocols.

“We respect their right to practice their religious culture,” Tabuclin said.

Imam Bucalan Cali, administrator of Dianalan mosque, said they allowed all their fellow Muslims to come and pray for the Eid, provided they all adhere to the health protocols. The mosque has a capacity of 1,000 people.

“It is wrong to reprimand them for coming to the mosque and praying. This is only once a year and this is very important to us Muslims,” Cali said.

In Tubod village, the mosques opened for dawn prayers but were closed by 6 a.m.

Mujahid Bolug said he missed the throng of people inside the mosque and in the houses of Muslim residents.

“We did not prepare much food because celebration is not allowed. We did not prepare gifts to be given to those who are coming to celebrate with us. Before the pandemic, the whole street in front of the mosque was filled with people who performed the Eid prayer. This year, the mosque’s balcony was not even filled in,” he said.