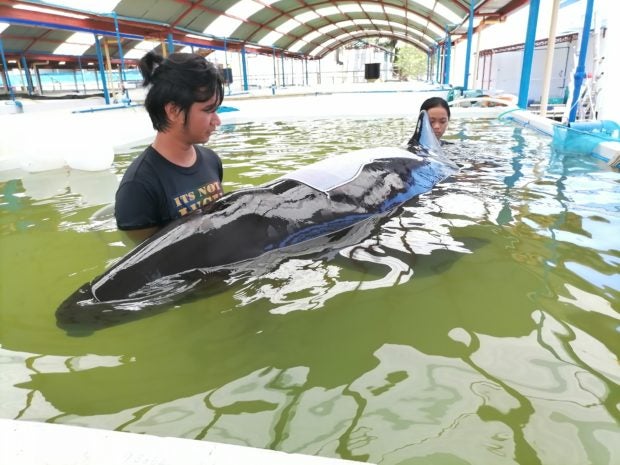 The 500-kilo, 3.8-meter long false killer whale is being rehabilitated at the Bureau of Fisheries Aquatic Resources facility at Barangay Lucap in Alaminos City, Pangasinan province after it was found stranded on the shoreline. Photo courtesy of Hasmin Chogsayan

ALAMINOS CITY –– Personnel involved in marine mammal stranding here are hoping that their new ward – a dolphin – would survive, prompting them to name it “Hope.”

The 500-kilo, 3.8-meter long false killer whale, a species of the dolphin, is being rehabilitated at the Bureau of Fisheries and Aquatic Resources facility in Barangay Lucap in this city.

It has scratches and wounds on its body, which may have been inflicted by a cookiecutter shark.

“The marine animal is strong and is swimming,” said Hasmin Chogsayan, a veterinarian of the BFAR.

She added: “We named it Hope, and we hope that it would recover soon.”

Chogsayan said Hope hardly eats the fish and squid given to it, and they could not give it oral medicine as it struggles when being fed or treated.

“It is big and strong and it takes nine persons to restrain it, but we still can open its mouth,” Chogsayan said.

She said they were waiting for the blood test results to determine if it has infections.

The dolphin was found stranded five days after another marine mammal died on May 6 while being treated at the BFAR facility in Sto. Tomas town, La Union province.

“Eco,” the melon-headed whale (also a species of dolphin) died after 20 days of rehabilitation.

It was found along the shoreline of Agoo town, brought to the Sungyot Island, and later to the BFAR–Regional Marine Technology Demonstration Center.

“Eco” was weak when found but was slowly regaining its health after she was given care by BFAR personnel who took turns caring for it.

Chogsayan said there is no assurance that marine animals would live after they are stuck in shallow waters.

“They can look healthy but can turn for the worse. They can look very sick but can recover well enough to be released to the sea,” she said.

“Hope” was first spotted off Colibra Island in Dasol town on the night of May 10.

The following morning, it got stranded at the coastal village of Eguia in the same town.

It was then brought to the BFAR facility in this city for treatment and rehabilitation.