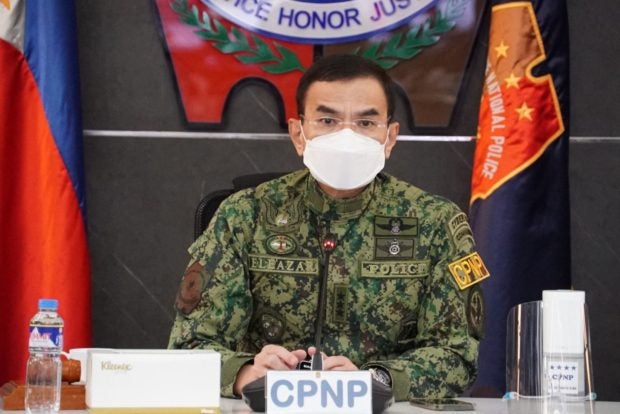 MANILA, Philippines — Philippine National Police chief Gen Guillermo Eleazar denied on Thursday that cops are behind the red-tagging of individuals and groups online, as he urged the public to report to authorities such instances.

(Well, first of all, we are not doing any red-tagging.)

Eleazar pointed out that some left-leaning groups who have been named have previously been identified by the Communist Party as its front organization.

(In fact, the leaders of the Communist Party of the Philippines – New People’s Army – National Democratic Front are the ones who identify the groups and they say these are their front organizations.)

Maginhawa community pantry organizer Ana Patricia Non earlier claimed to have been red-tagged, although the spokesperson for the government’s anti-insurgency task force said they were just “checking the background” of the people behind the initiative which aimed to provide free food to indigents in the community during the pandemic.

Eleazar said these police stations have been reminded to be careful about posting on social media because it could be misinterpreted.

(To our policemen, we are reminding them repeatedly to be careful on posting such information because it is always misinterpreted.)

He also urged the public to report to authorities if they see similar posts in the future so the proper sanctions can be imposed.

(And if you see any information, which I’m sure will come out, it is only right to bring it to us because we will caution them and make the proper sanction on the police who continuously contradict our directive and instruction.)