Riders and rights: What a scattered workforce can do | Inquirer News
Close
menu
search

Riders and rights: What a scattered workforce can do

MANILA, Philippines — Whether or not food delivery riders should be considered employees is a question being asked in other countries, too, especially now that their roles have acquired more importance because of the COVID-19 pandemic.

In some cases, public institutions are pushing to get digital platforms to recognize their riders and drivers as employees, and not just self-employed workers.

Last March, for example, the government of Spain announced a law that would classify food delivery riders as employees of digital platforms. The announcement was made months after Spain’s Supreme Court ruled that riders are employees, too.

Also last March, after a landmark ruling of the United Kingdom’s Supreme Court, Uber reclassified 70,000 UK drivers as its workers so they would be entitled to at least a minimum wage, vacation pay, and other benefits.

In 2020, France’s top court ruled that a former Uber driver should be considered an employee. 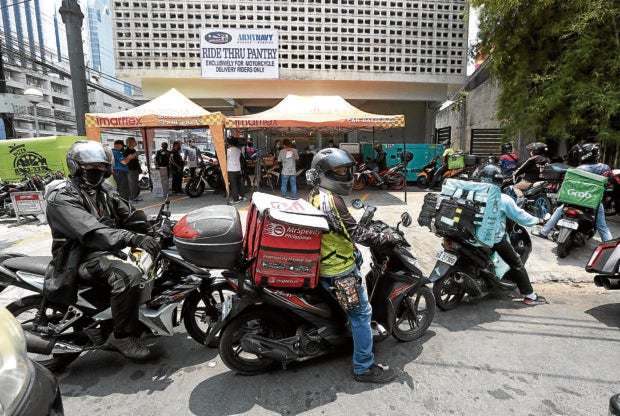 RIPE FOR UNIONISM? Unlike in a factory where workers can form a group or union with others at work in the same place, food delivery riders are scattered. They are not in constant touch with their coworkers, apart from seeing others wearing the same uniform while on the road. —MARIANNE BERMUDEZ

Here in the Philippines, demanding worker rights based on the four-fold test of the Department of Labor and Employment is easier said than done.

The fight for worker rights has begun long before the advent of smartphones and online deliveries. Before apps had independent contractors as riders, workers hired under subcontracting arrangements, such as janitors and security guards, were seeking better labor protections.

The fight starts in the workplace and sometimes gets as far as the Supreme Court—a long and winding journey for a process that is intended to resolve something as urgent as putting food on the table.

Nevertheless, it is not always a losing fight.

For example, back in 2000, a jeepney owner stopped allowing one of his drivers to use the vehicle after more or less three years of service. The driver took him to court, claiming to be an employee who had been dismissed without just cause.

The case reached the Supreme Court, which affirmed a 2004 decision of the Court of Appeals on the same case. The appellate court said the directives of the jeepney owner to the driver, such as carrying an identification card and wearing decent attire at work, were means of control.

“[The Court of Appeals] explained that the existence of an employment relationship did not depend on how the worker was paid but on the presence or absence of control over the means and method of the employee’s work,” the Supreme Court decision, known as Villamaria Jr. v. CA and Jerry V. Bustamante, reads in part.

The jeepney owner was then ordered by the court to pay the driver separation pay, as well as back wages based on the prevailing minimum wage at the time of his dismissal.

It remains to be seen if the same could be applied in the case of the riders of Lalafood, which officially went offline on Feb. 15.

But for things to change, two things need to happen at the same time in the local online food delivery market, according to labor lawyer Arnold de Vera.

One is that riders need to organize, even as a workers association.

There is now such an organization, the Kapatiran sa Dalawang Gulong, or Kagulong, but it has limits.

Unlike in a factory where workers can form a group or union with others at work in the same place, riders are scattered. They are not in constant touch with their coworkers, apart from seeing others wearing the same uniform while on the road.

The second imperative, according to De Vera, is a policy change, such as an amendment in the labor law, or a case filed in court.

Lalafood is a cautionary tale, the kind of story you only hear when it’s over.

The opportunities that the food delivery industry has provided workers, especially during the pandemic, cannot be understated.

“When everything is rosy, and you’re not looking for other benefits, you’re okay, right? You work and then you get paid,” said De Vera, noting that people only question their experience once it’s over.

“Only time will tell whether this is a viable long-term occupation,” he said.

The experience of “Peter,” a GrabFood rider for the past four years, is proof of the benefits that food delivery apps can bring.

Peter, a 37-year-old father of two, used to be employed as a company driver. But he prefers being with GrabFood which, he said, pays more even if he is not considered an employee.

He has associated being employed with earning just the minimum wage: The bare minimum seemed to be the limit, instead of being the least a company could pay him.

Peter said he would rather not be an employee if it meant going back to earning just that. But at the same time, he expressed a longing for the job security that only employees can enjoy.

“I’m just thinking, right now we’re strong. We can do trips. The problem is when you reach a certain age when you can’t work anymore,” he said, speaking in Filipino.

He added: “You don’t have [any insurance] like in the [Social Security System]. You don’t have benefits. You won’t have separation pay no matter how many years you worked for them.

(Editor’s Note: The riders interviewed for this report asked not to be identified.)