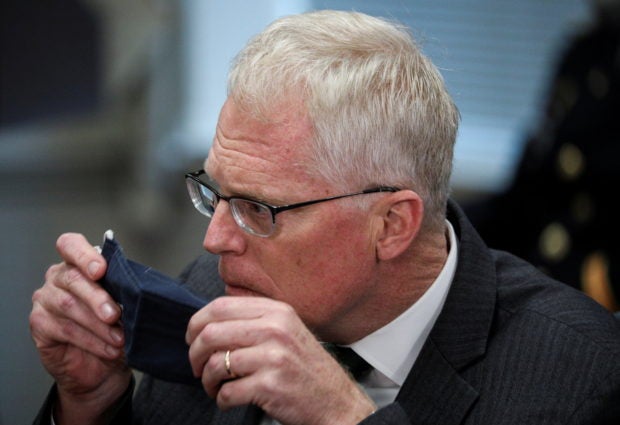 WASHINGTON — The man who led the Pentagon during former President Donald Trump’s supporters’ deadly attack on the U.S. Capitol is expected to defend his decisions at a congressional hearing on Wednesday, saying that sending in troops would have created the appearance of a “military coup.”

Former acting Defense Secretary Christopher Miller plans to say that the military was deliberately restrained on the day of Trump’s January 6 rally, that turned into an assault by hundreds of his followers that left five dead including a police officer, according to a copy of his prepared remarks seen by Reuters.

“I am keenly aware of the criticism regarding the Department of Defense’s response,” Miller is expected to testify. “My concerns regarding the appropriate and limited use of the military in domestic matters were heightened by commentary in the media about the possibility of a military coup or that advisors to the President were advocating the declaration of martial law.”

Miller will testify on Wednesday at a hearing held by the House of Representatives Oversight Committee on unanswered questions from the attack.

National Guard troops did not arrive at the Capitol until around 5:20 p.m. on Jan. 6, more than four hours after the grounds were first breached by the pro-Trump mob.

U.S. lawmakers have held a series of hearings on the federal government’s preparations for and response to the attack, leading to finger-pointing between city officials, federal law enforcement agencies, and military leaders.

Major General William Walker, the District of Columbia’s National Guard commander, testified before a Senate panel in March that Pentagon officials took more than three hours to approve a request for National Guard troops to back up police.

Miller is expected to testify that the Pentagon’s response was “rapid” in comparison to other military deployments in urban areas.

“This isn’t a video game where you can move forces with a flick of the thumb,” Miller is expected to testify.

Miller is expected to fault Trump for encouraging the violent attack.

“I stand by my prior observation that I personally believe his comments encouraged the protesters that day,” Miller said in his written testimony.

Also testifying at the hearing will be Jeffrey Rosen, the Acting U.S. Attorney General on January 6.

He is expected to testify that the Justice Department “reasonably prepared for contingencies ahead of January 6, understanding that there was considerable uncertainty as to how many people would arrive, who those people would be, and precisely what purposes they would pursue,” according to remarks seen by Reuters.