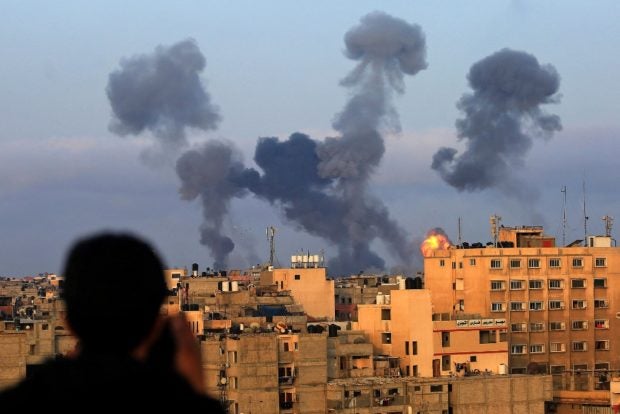 A Palestinian boy watches smoke billowing from targets during Israeli airstrikes on the southern Gaza region of Khan Yunis, controlled by the Hamas movement, on May 11, 2021. Israel launched deadly air strikes on Gaza in response to a barrage of rockets fired by the Islamist movement Hamas amid spiraling violence sparked by unrest at Jerusalem’s Al-Aqsa Mosque compound. Photo by Mahmoud KHATAB / AFP

JERUSALEM — This is a recap of the last few bloody days of violence between Israel and Palestinians sparked by a years-long bid by Jewish settlers to take over Arab homes in Israeli-annexed east Jerusalem.

Clashes erupt on Friday as Muslims pack the Al-Aqsa mosque compound — Islam’s third holiest site —  to pray on the last Friday of the holy fasting month of Ramadan.

Violence had been building in the Holy City and occupied West Bank for the previous week.

Palestinians hurl stones, bottles and fireworks at police who fire rubber-coated bullets and stun grenades. The site is also sacred to Jews as the location of two biblical-era temples.

On Saturday prayers at the mosque compound are held peacefully but violence flares elsewhere in east Jerusalem.

Some 121 Palestinians are wounded overnight, many hit by rubber-coated bullets and stun grenades, the Palestinian Red Crescent says.

Israeli police say 17 of its officers are wounded.

The Middle East Quartet — the US, Russia, EU and the UN — express “deep concern” over the violence.

Much of the recent unrest stems from the long-running legal effort by Jewish settler groups to evict several Palestinian families from their homes in the east Jerusalem neighborhood of Sheikh Jarrah.

A Supreme Court hearing on a Palestinian appeal is postponed by the justice ministry in light of “the circumstances”.

Scuffles between Palestinians and Israeli police in east Jerusalem continue overnight into Sunday.

Pope Francis joins global calls for an end to the violence.

In the evening Israeli police again face off against mostly young Palestinians at several locations in east Jerusalem.

In Monday morning clashes at the mosque compound the Palestinian Red Crescent says at least 395 Palestinians are wounded, with more than 200 hospitalized.

Fears of further chaos eases temporarily when the planned “Jerusalem Day” march to celebrate the Jewish state’s 1967 capture of the Old City is cancelled.

But then Hamas threatens escalation unless Israel pulls its security forces out of the compound, with more than 200 rockets reportedly fired by Palestinian militants towards the Jewish state.

Israel responds with 130 strikes by fighter jets and attack helicopters on “military targets” in the Hamas-run enclave.

Twenty-eight Palestinians — including 10 children — are killed in the exchange of fire.

Islamic Jihad said two of its commanders were among those killed.

Israel said two people were killed during a fierce volley of rocket fire on the coastal town of Ashkelon north of Gaza, with Netanyahu vowing Tuesday to intensify attacks on Gaza in reply.

In the north of the occupied West Bank a Palestinian is killed and another wounded by Israeli army gunfire.

In the evening, a 12-story building in Gaza where several top Hamas commanders had offices is completely destroyed in an Israeli air strike.

In retaliation, Hamas says it has launched 130 rockets towards the Israeli city of Tel Aviv, where air raid sirens ring out.