Arrest mask violators? Provide masks to those who can’t buy it, says Lacson 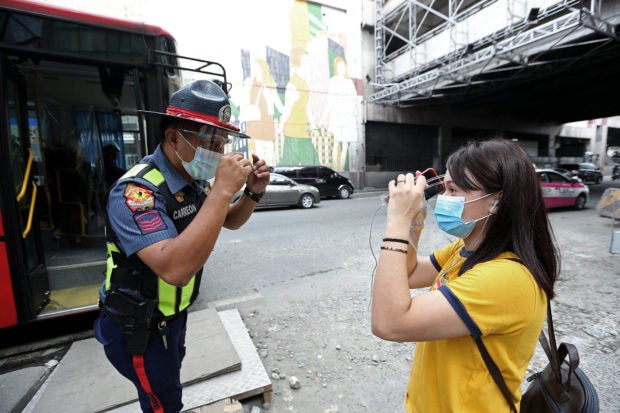 (FILE) A member of the Highway Patrol group asks a commuter to properly wear the face shield before boarding the carousel bus at EDSA-Taft in Pasay City.  INQUIRER PHOTO / RICHARD A. REYES

MANILA, Philippines — It is “fair and just” for the government to provide first to those who cannot buy masks before arresting Filipinos who fail to wear them, Senator Panfilo Lacson said Wednesday.

Lacson made the remark after President Rodrigo Duterte ordered the police to arrest those who fail to wear masks or fail to wear them properly.

“Before implementing the arrest order issued against Filipinos not wearing masks, it is but fair and just for the government to provide to those who don’t have the money to buy them,” Lacson said in a tweet.

Before implementing the arrest order issued against Filipinos not wearing masks, it is but fair and just for the government to provide to those who don’t have the money to buy them.

According to Duterte, he had to be strict with the minimum public health protocols because the government could not afford the piling up of cases as the country’s coffers are again being emptied.

Newly installed Philippine National Police chief Lt. Gen. Guillermo Eleazar has ordered the police to carry out Duterte’s directive but assured the public that the police would respect the rights of violators and exercise maximum tolerance.

Meanwhile, Justice Secretary Menardo Guevarra said the guidelines on Duterte’s order to arrest and detain people for not wearing masks properly may be out this week.