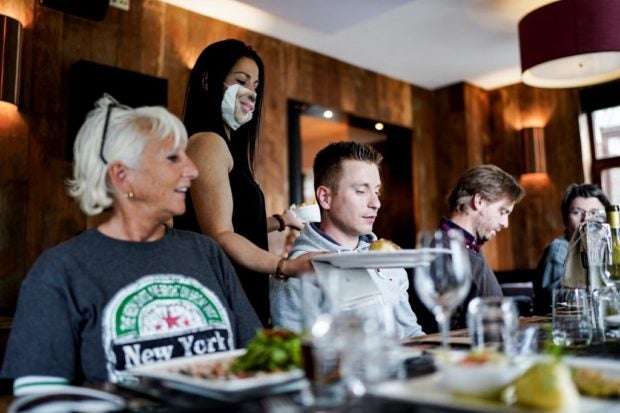 In this file photo taken on June 8, 2020 a waitress wearing a protective face mask with a picture of her face, works at the “Lodge” restaurant in Brussels, after the reopening of restaurants, as Belgium eases lockdown measures taken to curb the spread of the COVID-19 (the novel coronavirus). Belgium is set to reopen indoor dining and entertainment on June 9, 2021 as the country reopens after another wave of infections to the Covid-19 more than one year after the start of the pandemic. Photo by kenzo tribouillard / AFP

BRUSSELS — Belgium will allow indoor drinking, dining and entertainment venues for audiences of up to 200 people to reopen from June 9, the country’s prime minister said Tuesday.

Cafes and restaurants with outdoor seating reopened on Saturday after almost seven months, but theaters and cinemas have remained closed.

By June 9, Belgium expects to have vaccinated 80 percent of people over 65 and vulnerable people, he said.

It will be necessary to “keep the situation under control in the intensive care units” where the number of patients should not exceed 500, De Croo added.

There are currently around 700 patients in intensive care, a figure that has been falling steadily for the past two weeks.

The measures also include loosening remote working rules by allowing one in five workers to return to the office in four weeks’ time.

Rules around gatherings will be eased too, with four guests allowed inside people’s homes instead of two.

In the first stage of a four-phase plan, from June 9 concerts and sporting events with up to 200 people indoors — and up to 400 outdoors — will be allowed with mask-wearing and social distancing.

Then from August 13, “mass events” such as music festivals can be held for those providing proof of vaccination or a recent PCR test — a measure De Croo called a kind of “Covid safe” pass.

The pass would only be used for major events in the second half of summer.

“These announcements come too late, many festivals have already cancelled their 2021 edition,” Didier Gosset of the Wallonia Brussels music festival federation told the Belga news agency.

But the organizers of Tomorrowland, one of the world’s biggest electronic musical festivals, said they were “delighted” at the news, vowing to take health measures “very seriously” for this year’s event in late August and early September.

In Belgium, total infections since the beginning of the pandemic recently broke one million cases.

But even though cases have dropped over the past weeks, there was still a daily average of 2,936 in the past seven days.

Vaccinations have accelerated in the country since the end of March, with over 3.5 million of the population of 11.5 million having received at least a first dose.