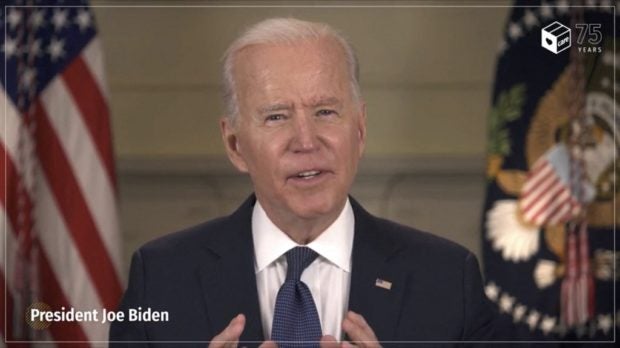 President Joe Biden speaks during An Evening with CARE, Celebrating the 75th Anniversary of the CARE Package on May 11, 2021 in New York, New York. Photo by Theo Wargo / GETTY IMAGES NORTH AMERICA / Getty Images via AFP

WASHINGTON — President Joe Biden said Tuesday that almost half the world’s leaders have contacted him, asking for US help in obtaining Covid-19 vaccines.

“Every country in the world is now looking at us to provide for their lack of capacity to produce and/or have vaccines,” Biden said in a virtual meeting with US state governors.

“I literally have, virtually 40 percent of the world leaders calling and asking, can we help them,” Biden said. “We’re going to try.”

The US leader did not say which countries he was referring to. However, there is a growing international clamor for sharing the enormous US surplus in vaccines, including in hard-hit India.

However, Washington has come under growing pressure to release more vaccines, given a surplus expected to amount to hundreds of millions of doses.

Biden repeated his position that he is prioritizing getting Americans inoculated but said “we are going to be working with other countries, because there are going to be a lot of variants.”

“I think we can produce a whole hell of a lot more vaccines that we can make available,” he said.