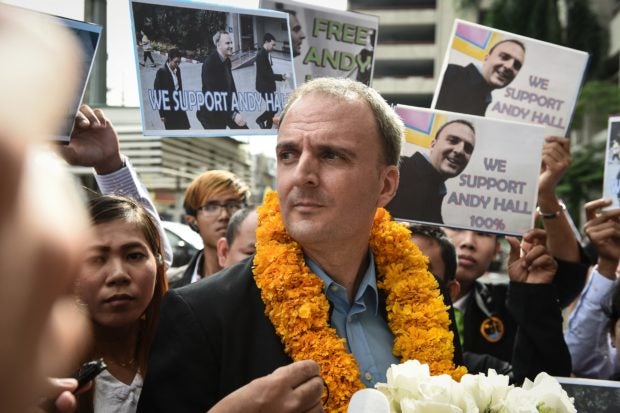 In this file photo taken on September 20, 2016, British labor activist Andy Hall speaks to the media as he arrives at the Bangkok South Criminal Court in Bangkok, ahead of the expected verdict on a criminal case brought against Hall by the Natural Fruit Company for criminal defamation. – The rights activist hit with almost a decade of lawsuits after raising concerns about labor conditions at a Thai pineapple company received a court decision on May 11, 2021, clearing him in the final case against him. (Photo by Lillian SUWANRUMPHA / AFP)

BANGKOK — A rights activist hit with almost a decade of lawsuits after raising concerns about labor conditions at a Thai pineapple company received a court decision Tuesday clearing him in the final case against him.

In 2016, the Briton was found guilty of criminal defamation and given a suspended three-year prison sentence before the conviction was overturned in June last year.

The company later launched a 300-million-baht ($9.6 million) civil defamation case but dropped the case before it went to trial last year.

Hall was informed Tuesday of the Thai Supreme Court’s verdict in the final case, over separate civil defamation charges relating to a 2013 interview he gave to the news organization Al Jazeera.

The court ruling was made in June 2020 but coronavirus disruptions meant Hall’s lawyer only received it on Tuesday.

The court found Hall not guilty and overturned a lower court’s decision that he should pay 10 million baht compensation to the company.

“The Supreme Court stands by the Appeal Court’s (verdict) to dismiss the plaintiff’s (case) as it is factually concluded that the defendant acted honestly and criticized with fairness,” the court said.

“The defendant’s interview with the media about the plaintiff’s employment practices does not warrant compensation.”

Hall, who left Thailand in 2016 after living there for 12 years, said the decision was a relief.

“After years of ongoing judicial harassment that has taken a heavy toll on me, my family, and my colleagues, this is not a victory,” he said in a statement.

He said he never intended to harm any legitimate business interests through his work.

Comment has been sought from Natural Fruit, a major supplier to the European drinks market.

The company previously denied the allegations raised in the 2012 report.