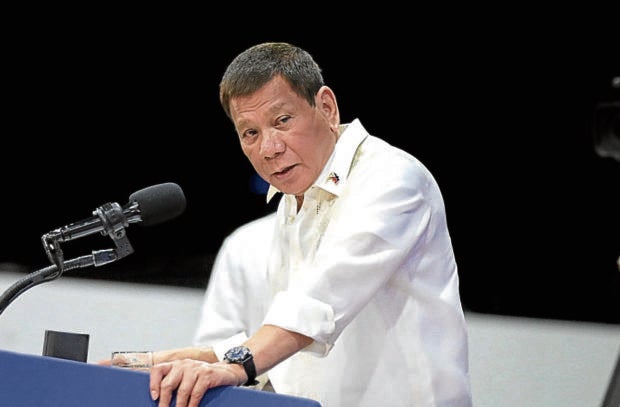 MANILA, Philippines —President Rodrigo Duterte said Tuesday he might consider resigning if he cannot give the “barest minimum” of peace in Mindanao following the latest atrocities in a Maguindanao town.

“Pag ganun ang gobyerno, mag-resign na lang ako sa totoo lang. Hindi ako atat na atat talagang maging Presidente but if I cannot at least [give] the barest minimum of a peaceful place, then I have no reason to stay. It would be a failure,” Duterte said in a speech before troops and officials in Datu Odin Sinsuat, Maguindanao.

(When the government is like that, I will just resign to be honest. I’m not eager to be President, but if I cannot at least attain the barest minimum of a peaceful place,  then I have no reason to stay. It would be a failure.)

“Wala akong magawa e, I must be frank enough and be humble that you know, sorry. Sinubukan ko lahat, di umubra,” he added.

(I cannot do anything, I must be frank enough and be humble that you know, sorry. I tried everything but it didn’t work.)

Following the news of the attack, Duterte said he could only “imagine the horror of the people there running back and forth.”

“Is that the kind of government that I can give to the people? Sabi ko kung hindi ko kaya, p**** i** magreresign ako. Then you can demand my resignation and maybe I will consider it,” Duterte said.

(Is that the kind of government that I can give to the people? If I cannot fix it, I will resign. Then you can demand my resignation and maybe I will consider it.)

The President also said he was saddened over the recent incident in Maguindanao.

“I am moved to tears to see what is really happening. It’s pure carnage. The ultimate beneficiaries of the violence created here are the civilians,” he said.

On May 8, over 100 gunmen from the Bangsamoro Islamic Freedom Fighters occupied Datu Paglas town in Maguindanao leading to a gun battle between the said group and the military.

The town was retook following a six-hour standoff. No casualties were reported.