PDEA destroys P61M in meth, most of it from Ozamiz, in De Oro mortuary | Inquirer News
Close
menu
search

PDEA destroys P61M in meth, most of it from Ozamiz, in De Oro mortuary 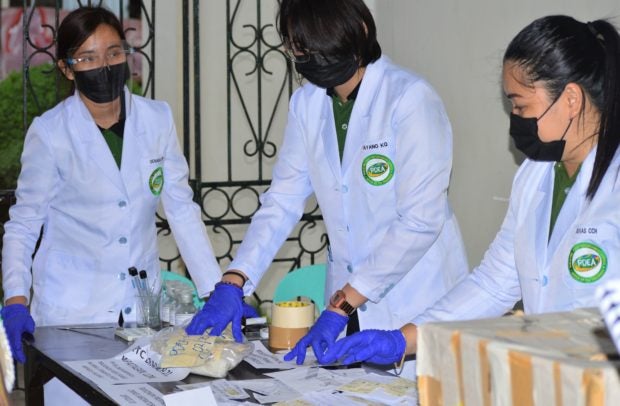 Lab technicians of the Philippine Drug Enforcement Agency (PDEA) regional office check the drugs before these were destroyed at a mortuary in Cagayan de Oro on Monday (May 10) PHOTO BY JIGGER J. JERUSALEM

CAGAYAN DE ORO CITY—The regional Philippine Drug Enforcement Agency has destroyed 9.04 kilograms of mostly shabu, or crystal meth, worth more than P61 million at a mortuary here on Monday (May 10).

Most of the drugs were being kept as evidence in court for previous drug cases, according to Benjamin Recites III, PDEA assistant regional director.

Of the total meth volume, 7.95 kilos belonged to the couple Gaudencio and Melodina Parojinog Malingin who were both arrested in 2017.

Melodina was the sister of the late Reynaldo Parojinog, former Ozamiz City mayor, who was killed along with several family members and bodyguards during a police raid on his home in 2017, more than a year after President Rodrigo Duterte rose to power on a campaign promise of getting rid of the drug menace.

Her death came two days after her brother, Ricardo Parojinog, was found dead inside the Ozamiz City police jail.

Members of the Parojinog family were among the personalities targeted by the Duterte administration for their alleged involvement in the drug trade.

Recites said the confiscated drugs came from all over the region, but bulk of it came from Ozamiz City.

He said the PDEA was still conducting an inventory of drugs in the region.

Cagayan de Oro City Councilor Roger Abaday, who witnessed the destruction, said it was better that the drugs were destroyed so these could not find its way back to the streets.

“When I examined the drugs, I noticed these are mostly high-grade, especially those that came from Ozamiz,” Abaday said.