PRESIDENT SAYS HE'S NOT A SWIMMER AND AFRAID TO DIE. IT WAS ALSO LOGISTICALLY IMPOSSIBLE FOR HIM TO GO THROUGH BIG WAVES
By: Daphne Galvez - Reporter / @DYGalvezINQ
INQUIRER.net / 09:52 PM May 10, 2021 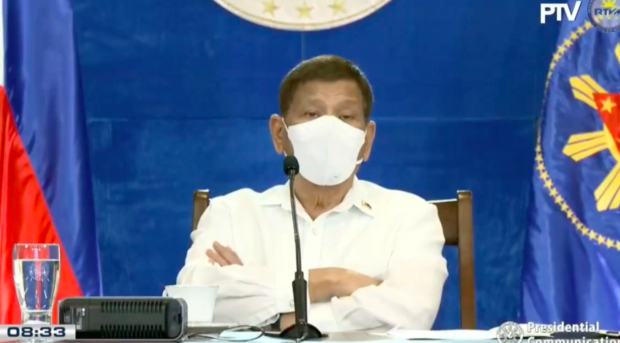 President Duterte on the jet ski promise: It takes hours to get there by jet ski. I would pass out in the middle of the ocean. They say the waves there are as big as the ocean. PHOTO/Screenshot  from government TV

MANILA, Philippines — President Rodrigo Duterte admitted on Monday that his 2016 pledge to ride a jet ski to the Spratly Islands and plant a Philippine flag there was a “pure campaign joke,” calling those who believed him “stupid.”

“Panahon ‘yan sa kampanya ‘yan. At saka ‘yung biro na ‘yun, ‘yung bravado ko, it was a pure campaign joke at kung naniniwala kayo sa kabila, I would say you are really stupid,” he said in his regular public address on Monday.

(That was during election season. And then there was that joke, my bravado, which was purely political in nature, and if you believe it, I would say you are really stupid.)

He said he had planned to go through with his promise, even ended up buying a second-hand jet ski but found it to be logistically impossible as he said he would run out of gasoline and could be overwhelmed by waves.

(I planned for that. I bought a second-hand jet ski but the spare parts I have ordered have not yet arrived. I couldn’t do anything.)

(Find someone who will go there by jet ski. It would take hours. I would conk out in the middle of the sea. They said the waves there are as big as the sea.)

He also said that he was discouraged by his fear of drowning because he does not know how to swim in the event the jet ski capsizes due to the massive waves.

(I said, this is difficult. I would say that fear got to me. I couldn’t do anything. I am scared to die. Do you know I cannot swim? What if the jet ski capsizes? By this time, I would’ve been the late Rodrigo Duterte.)

Critics have recalled Duterte’s 2016 promise after calling the Philippines’ victory over China at the Permanent Court of Arbitration in The Hague is just a “piece of paper” that can be thrown away.

He also claimed he never promised during his campaign that he would retake the West Philippine Sea.

READ: ‘I never promised‘ anything about West Philippine Sea during election campaign – Duterte

After getting elected, he clarified that his jet ski remark was only a hyperbole.