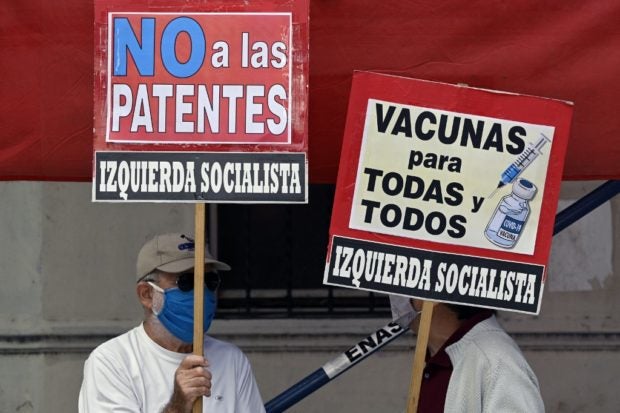 People hold banners reading  Vaccines for all and No to patents during a protest of members of leftist parties outside the World Health Organization (WHO) headquarters in Buenos Aires, on April 14, 2021, amid the coronavirus pandemic. (Photo by JUAN MABROMATA / AFP)

NEW DELHI—New COVID-19 deaths surged past 4,000 for the first time in India on Saturday in one of the world’s worst outbreaks, as pressure by the European Union mounted on Washington to end vaccine export limits and offer a concrete plan to lift patents.

“I call very clearly on the United States to put an end to export bans not only on vaccines but on vaccine ingredients, which prevent production,” French President Emmanuel Macron told reporters at an EU summit in the Portuguese city of Porto.

He was referring to a de facto US ban on the export of vaccine raw materials.

German Chancellor Angela Merkel said the EU had exported much of its own production and the United States should follow suit.

“I do not think that a patent waiver is the solution to make more vaccines available to more people,” she said in Berlin. “Rather, I think that we need the creativity and the power of innovation of companies—and to me, that includes patent protection.”

Earlier, Pope Francis had focused on his desire to see patent waivers to “allow universal access to the vaccine.”

He called for the temporary suspension of intellectual property rights, condemning the “virus of individualism [that] makes us indifferent to the suffering of others.”

The call for waivers has gained momentum after the United States announced surprise support for such a scheme to enable adequate vaccine supplies.

Meanwhile, World Health Organization (WHO) chief scientist Soumya Swaminathan said early signs of a coronavirus surge in India “were missed until it reached the point at which it was taking off vertically, [that is], it’s multiplying at a rate at which it’s very difficult to stop.”

As India battles to stem the rising tide, Africa is fretting over a potential knock-on effect regarding vaccine supplies for the continent.

“We are watching in total horror and disbelief [at] what is going on in India and we don’t expect that vaccines will be shipped out of India anytime soon,” Cameroonian virologist Dr. John Nkengasong, director of the Africa Centers for Disease Control and Prevention, told an online meeting of African Union health ministers.

An African Vaccine Acquisition Task Team is hoping to acquire vaccines by the end of July, but Nkengasong said he hoped this could be done earlier.

WHO president Tedros Adhanom Ghebreyesus said at the meeting that the inequitable distribution of vaccines was “not just a moral outrage. It’s also economically and epidemiologically self-defeating.”

Earlier Saturday, Madagascar received its first batch of vaccines through the Covax global sharing scheme—one of the last African countries to obtain supplies after months of resistance by President Andry Rajoelina.

By Saturday the global pandemic had killed more than 3.2 million since emerging in China in December 2019, according to a tally from official sources compiled by Agence France-Presse (AFP).

Adding to Macron and Merkel’s appeals, European Council chief Charles Michel said the bloc was “ready to engage” and discuss a US offer to suspend patent protection on vaccines “as soon as a concrete proposal” emerges.

But Michel, speaking in Porto, added that the EU doubted the idea could be a short-term “magic bullet” and encouraged “all the partners to facilitate the export of doses.”

India, which reported more than 400,000 new infections on Saturday, now accounts for nearly half of the world’s new known cases.

Its coronavirus death toll now stands at 238,270, but experts fear official data are a gross underestimate.

The aim is to stop its outbreak from snowballing during the upcoming Eid celebrations at the end of the Islamic holy month of Ramadan.

In Greece, thousands of people hit private beaches, which reopened for the first time this year Saturday.

There were strict spacing requirements in place, regular disinfection of deck chairs and toilets and no music at beach bars.

“We’ve been waiting very long to be able to receive here all the tourists and citizens that want to sunbathe and enjoy the sea,” said Andreas Kondylis, mayor of the southern Athens suburb of Alimos.

The tourism-dependent country hopes to launch its summer season next week.

The global arsenal against the coronavirus expanded as China’s Sinopharm became the first non-Western shot to get the green light from the WHO—which had earlier given emergency use authorization to the Pfizer-BioNTech, Moderna, Johnson & Johnson and AstraZeneca vaccines.

In Japan, concerns remain about the upcoming Tokyo Olympics, with the country’s vaccination program moving slowly.

A coronavirus state of emergency in parts of Japan, including Tokyo, was extended Friday.

But International Olympic Committee vice president John Coates was adamant on Saturday that the games, scheduled to start on July 23, will go ahead.