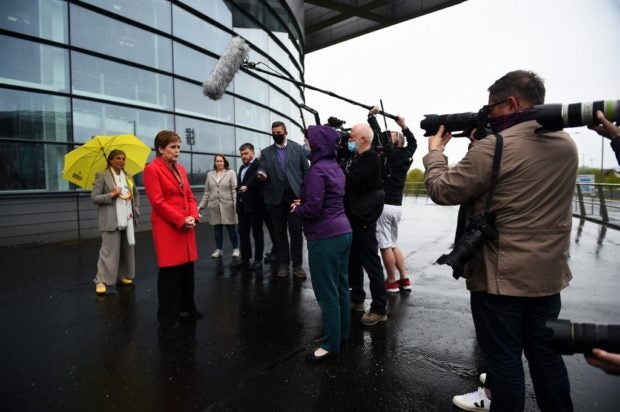 Scotland’s First Minister and leader of the Scottish National Party (SNP), Nicola Sturgeon (2L) speaks to the media as she congratulates SNP candidate Kaukab Stewart (L) after she was elected MSP for Glasgow Kelvin in the Scottish Parliamentary Election, in Glasgow on May 8, 2021. Photo by Andy Buchanan / AFP

EDINBURGH — As votes are being counted in a key Scottish election, we look at the country’s long quest for independence from its southern neighbor England:

Faced with Norse domination, the Picts and the Gaelic Scoti were united under Kenneth MacAlpin, considered the first king of Scots, who died in 858.

But when the succession of his dynasty fell into question and Edward I of England was invited to arbitrate, he claimed suzerainty, invaded in 1296 and earned himself the nickname “Hammer of the Scots”.

The Wars of Scottish Independence lasted until 1357, though Robert the Bruce had effectively established independence by defeating the English forces at Bannockburn in 1314.

Union of the Crowns

The 1502 Treaty of Perpetual Peace, signed by Scotland’s James IV and England’s Henry VII, sought to put an end to the intermittent Anglo-Scottish wars. It agreed on the marriage of Henry’s daughter Margaret to James.

A century later in 1603 in the Union of the Crowns their great-grandson, King James VI of Scotland, inherited the English throne from the childless Queen Elizabeth I.

Sixteen years earlier, Elizabeth had had James’ Catholic mother Mary, Queen of Scots, executed for treason, fearing she could become a magnet for dissent.

The two countries remained separate states for more than a century until Scotland was crippled by a disastrous 1698 attempt to establish a colony in Panama, all but ruining the nation.

However, London political parties’ failure to address Scotland’s problems revived the issue of independence in the late 1960s.

In 1967 the then marginal Scottish National Party (SNP) won a spectacular victory in a by-election in Hamilton, a town in central Scotland, with other wins following.

IN 1979, a referendum on creating a devolved assembly in Scotland won a narrow majority but the UK government ruled the turnout was not high enough for it to pass into law.

However, in a second referendum in 1997 after Labour prime minister Tony Blair came to power, 74.3 percent voted “yes”.

But in 2007 the SNP won a majority and the charismatic Alex Salmond was named First Minister. With the parliament already having tax powers, he launched a campaign for a referendum on independence.

In 2013 the nationalist-dominated Scottish government published a 649-page white paper pledging that an independent Scotland would keep the pound and British monarchy but establish its own defense force.

On September 18, 2014, more than four million voters went to the polls in a hotly contested independence referendum. Scots voted to stay in the union by 55 percent to 45 percent.

Salmond resigned and was replaced by Nicola Sturgeon.

In the 2016 Brexit referendum 62 percent of Scots voted to stay in the EU while England and Wales chose to leave.

Sturgeon argued that leaving Europe against its will had changed Scotland’s constitutional situation.

Before this week’s vote Sturgeon said Britain’s Conservative Prime Minister Boris Johnson would have no “moral justification” to prevent a second vote on independence if the SNP emerges on top in this weekend’s elections.

The SNP won a fourth consecutive term Saturday but appeared likely to fall short of an outright majority.