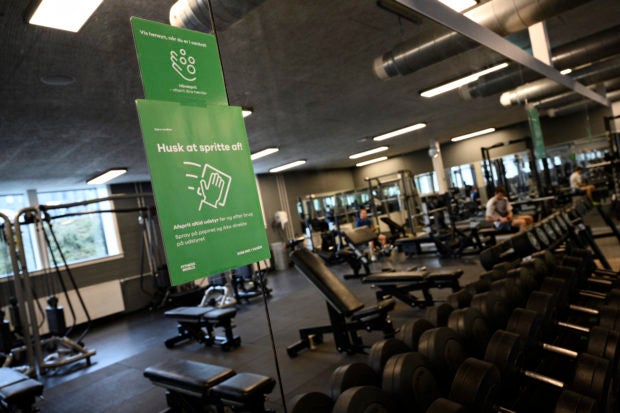 Pandemic measures signage is seen in a fitness center as lockdown restrictions were partially eased in Copenhagen, on May 6, 2021, amid the ongoing coronavirus Covid-19 pandemic. (Photo by Philip Davali / Ritzau Scanpix / AFP) / Denmark OUT

Copenhagen, Denmark — Gyms, theaters, and cinemas on Thursday welcomed Danes back thanks to a new round of COVID-19 restriction easing and a reliance on a “corona pass.”

Armed with the pass, people in Denmark can already visit restaurants, museums or the hairdresser.

Now the new certificate —  confirming that they have either tested negative in the past 72 hours, been vaccinated, or recently recovered from COVID-19 — will also give them access to other places that have been off-limits due to the pandemic.

“I don’t mind showing the corona pass at all. I think it’s very good, you feel safe while everything is reopening,” 22-year-old student Ottilia, told AFP as she stopped by to buy tickets for an upcoming show at the Falkoner cinema in central Copenhagen.

“I’m very excited, I have missed going to the cinema. I’m looking forward to seeing a movie on a big screen again,” project manager Stina, who had arrived with a group of few friends to watch a new Danish movie, said.

Anything for a beer

Launched in early March, as zoos reopened, the use of the pass has been a requirement for each new stage of Denmark’s reopening.

“It’s a major success because it has combined the reopening of the economy and has boosted testing,” Lars Ramme, head of tourism at the Danish Chamber of Commerce, said.

Bars, cafes, and restaurants have been using it since April 21.

“I honestly think that after four, five months of lockdown, at least in Copenhagen, people will do anything to go and grab a beer and get some food,” Mikkel Bjergso, founder of micro-brewery Mikkeler.

In one of his pubs, Warpigs, he has installed a self-testing booth for customers without a valid certificate.

Primarily digital, the health pass is currently available through a mobile phone application that accesses an individual’s personal health data, but it also comes in a paper version.

Like his friends, who had met up to share a few beers, he gets tested twice a week at one of the many sites set up around Copenhagen.

With only 12.7 percent of Danes fully vaccinated, the pass relies heavily on testing.

In the center of the Danish capital, the company Copenhagen Medicals has transformed a concert hall into a makeshift testing center where up to 3,000 people can be tested every day.

Up to 500,000 tests can be performed daily, and the activity has become almost part of everyday life in the Nordic country of 5.8 million inhabitants.

“It’s the new normal. I put it in my schedule that every third day I go and get tested,” Maibrit Dener-Madsen, supervisor at the cinema, told AFP.

In a country where trust in authorities is generally high, the adoption of the corona pass has met little or no resistance.

However, among the objectors is the protest movement “Men in Black,” which regularly conducts protests around Copenhagen.

While one in three Danes thinks the restrictions have been too severe, just over 10 percent support the protests, a recent survey by the University of Aarhus found.

In its recommendations, Denmark’s Ethics Council — an independent body — calls for “a gradual reduction in the use of the corona pass so that it is only used as long as it has a significant effect on the fight against the epidemic.”