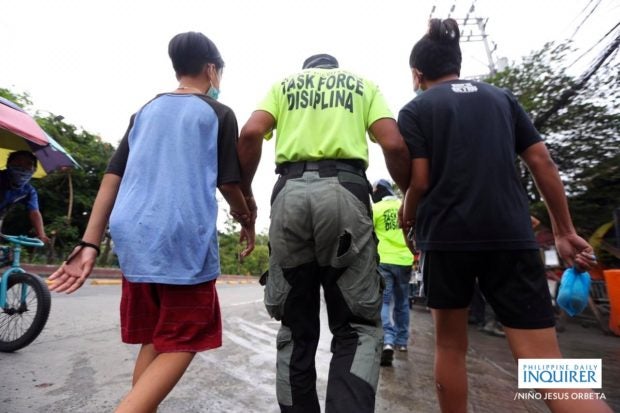 Duterte, during his pre-recorded address on Wednesday night, said those who are not wearing their face mask properly should be arrested “because otherwise, you can’t protect the public.”

“In practice, it will even be discriminatory again. Additionally, the cited allowable period of detention without charges is also wrong and arbitrary,” he added.

The Revised Penal Code provides for a period of detention for offenses depending on the penalty it carries.

However, in the case of improperly wearing a face mask, there is no law that can be used as a basis for enforcing an arrest.

Duterte said those arrested should be detained, investigated for nine hours.

“There appears to be no clearly defined crime or offense covered by any specific law or lawful ordinance for a valid instance of warrantless arrest to operate,” Olalia said.

Last year, then Chief Justice Diosdado Peralta was surprised at the number of people arrested for violating quarantine protocols and the delay in deciding whether to file a case against them or not.

From March to October last year, data from Joint Taskforce COVID showed that 1,728 quarantine violators had been detained.

The Supreme Court has taken steps to decongest jails, including allowing video conferencing to expedite the release of detainees.

For Olalia, the government – instead of a “knee-jerk draconian idea” – should adopt a “commonsensical solution.”

“Shouldn’t simply providing face masks for free to those who cannot afford them and launching massive popular information drives do the trick rather than overpacking our already cramped and congested jails?” Olalia asked.

“These serial mailed fist cures would just worsen the problem and lock us up in this slippery slope of inane coercive measures,” he added.