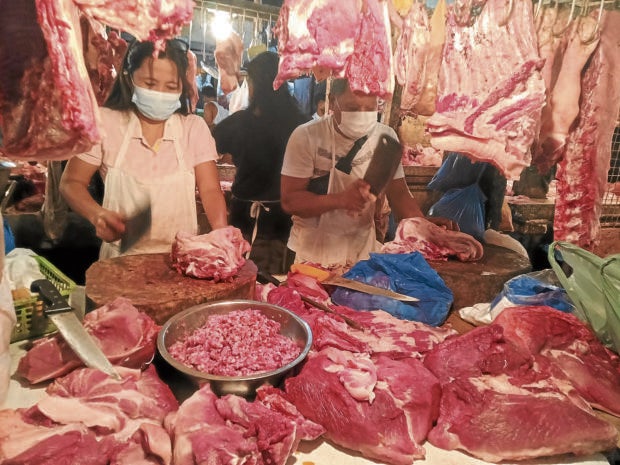 FILE PHOTO: The price of pork has soared to P400 per kilo in Bulacan province early this year (2021) due to scarcity of supply after 60 percent of the province’s hog population was hit by the African swine fever. —CARMELA REYES-ESTROPE

The government initially planned to raise the minimum access volume (MAV) of imported pork to 404,000 MT  from the current 54, 210 MT but this was strongly opposed by local hog raisers and many senators.

“Ang napag-agreehan namin is 254,000  metric tons (We agreed on 254,000 metric tons),” Sotto said in a phone interview after announcing that a compromise agreement was reached between the Senate and the executive department.

He said the Senate wanted the pork imports cap at 200,000 MT only but the government made a counter offer.

(Sec. Sonny made a computation which  is  acceptable to us, to local  hog raisers without  hurting their target reduction in inflation)

Aside from reducing the cap on imported hogs, Sotto said the government also agreed to raise the tariff rates on pork imports.

READ: EO 128 to be amended as ‘compromise reached’ on pork import policies — Sotto

Read Next
Año urges senators not to defund SBDP
EDITORS' PICK
Manila is 78th most expensive city in the world for foreign workers
TeaM Energy pushes development programs to help in pandemic rebound
Want to help local farmers? Shop small and eat Real Food
Piolo Pascual: The Ultimate Heartthrob continues to level up
ICC is everything but a court of ‘white people’
Garcia softens stance, meets IATF halfway on swab-upon-arrival policy
MOST READ
Sharon Cuneta on living in the US: ‘Nagagawa ko lahat ng normal na bagay’
ICC is everything but a court of ‘white people’
Duterte-Duterte tandem possible but ‘winnability is another question’ — Binay
More than 150,000 voters wiped off the registration list – Comelec
Don't miss out on the latest news and information.