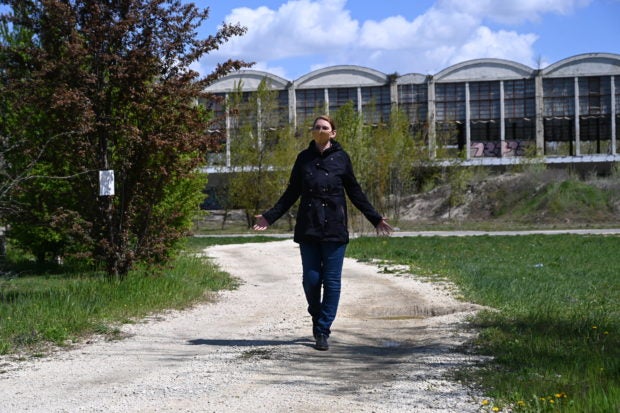 Local district mayor Krisztina Baranyi walks across the site where the construction of a top Chinese university, the Fudan’s campus, is planned, in the 9th district of Budapest, Hungary, on April 23, 2021. Currently derelict, the area is to house a half-million-square-meter (five-million-square-feet) complex by 2024, Fudan’s first European campus, according to a deal signed between Hungary and the Shanghai-based university’s president last week. Photo by ATTILA KISBENEDEK / AFP

BUDAPEST — Standing on the proposed new home in Budapest of a top Chinese university, the local district mayor Krisztina Baranyi is squaring up for a stand-off with powerful Prime Minister Viktor Orban’s government.

“They want to plant a giga-university without anyone here agreeing to it,” Baranyi, a combative independent politician, told AFP at the windswept former industrial site beside the river Danube.

Currently derelict, the area is to house Fudan University’s first European campus in a half-million-square-meter (five-million-square-foot) complex by 2024, according to a deal signed between Hungary and the Shanghai-based university’s president last week.

But the sprawling project has fed growing unease about Hungary’s diplomatic tilt from West to East and its soaring indebtedness to China.

Internal documents leaked to investigative journalism website Direkt36 last month revealed that China is expected to give a 1.3-billion-euro ($1.6-billion) loan to cover most of the estimated 1.5-billion-euro costs.

A Chinese construction firm has also already been earmarked as main contractor without a bidding process, according to the documents.

“I was shocked when I found out. Everything is opaque. No one was consulted,” Baranyi complained.

She plans to let local residents have their say on whether the municipality should hand over the site to the state in a referendum later this year.

“If local people said ‘no’, it would surely be a step too far, even for the government, to then infringe the district’s ownership rights,” she said.

Details of the referendum are yet to be worked out but Baranyi hopes it could emulate the success of a 2017 petition launched by young activists that led to Hungary dropping its expensive bid to host the 2024 Olympics.

Budapest’s liberal mayor Gergely Karacsony has also blasted “Chinese influence-buying” in Hungary and urged Orban not to force projects on the capital against its will.

“Until the government fully publishes the contract details, we do not consent to the construction,” Karacsony said last week.

However, other than backing the district’s referendum drive, city officials privately concede that they have limited powers to block the project, whose cost exceeds Hungary’s annual higher education budget.

The government argues that a prestigious outpost of Fudan University, ranked 100th in the Shanghai Ranking, would permit thousands of Hungarian, Chinese and other international students to acquire high-quality diplomas.

It would also fit in with previously agreed plans to build a 10,000-capacity dormitory for Hungarian students at the site, it says.

“There is no plan B,” said the government minister in charge of the project Laszlo Palkovics last week, adding the campus would be “good for Hungary, China and the community”.

Fudan is the latest landmark in Orban’s foreign policy of “Eastern Opening”, which analysts describe as a geopolitical balancing act, while critics portray the nationalist premier as China and Russia’s “Trojan horse” inside the European Union and NATO.

Alone in the EU, Hungary has used Chinese and Russian coronavirus jabs to accelerate its vaccine rollout, one of the fastest in the bloc.

Another vast project, a high-speed railway between Budapest and Serbia, part of Beijing’s “Belt and Road” global infrastructure plan to help deliver Chinese goods to Europe, is also mostly financed by a two-billion-euro Chinese loan.

But with Chinese workers set to build the university campus and Hungarian taxpayers footing the bill “it is hard to see any advantage for Hungary in Fudan,” a Budapest-based analyst Peter Kreko told AFP.

He said that the loan also meant a “loss of economic sovereignty” and pointed to Budapest’s stated rejection of the EU’s coronavirus recovery credit line last week as a signal it preferred debt “without strings attached like ‘rule-of-law’ conditions”.

“We are becoming extremely indebted to China, and that can be dangerous,” Kreko added.

The courting of Fudan, which deleted references to “freedom of thought” from its charter in 2019, also compounds rising alarm about academic freedom in Hungary.

Fudan provides China with “a foothold to spread its influence in Europe”, the US embassy in Budapest warned last week.

The foundations should avoid an “internationalist globalist” approach and focus on “national interest” and “national thinking,” Orban said Friday.

In late 2018, the Central European University, founded by liberal US billionaire George Soros, said it was “forced out” of Budapest to Vienna after a bitter legal dispute with Orban.