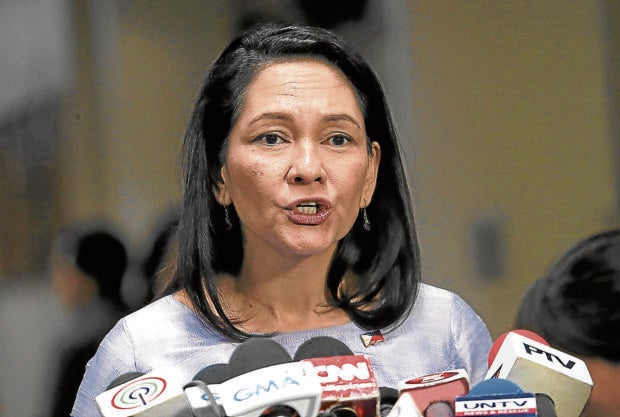 MANILA, Philippines — Underage girls from Mindanao, some as young as 14, were being sent to Syria using tampered passports under a scheme hatched by unscrupulous recruiters and immigration officers, a Senate committee learned on Tuesday, as it peeled a new layer in the insidious trafficking of young women to the war-torn country.

Sen. Risa Hontiveros, chair of the Senate women and children committee, presented video clips of three young women who recounted their experiences of being trafficked to Damascus as minors through a modus called “baklas passport,” in which their names and birth dates were forged so they could leave the Philippines unchecked.

Following earlier testimonies of other victims, “we have found an even more disgusting phenomenon: Minors as young as 14 years old being trafficked to Syria,” the senator said.

Hontiveros gave aliases to the girls, “Omaima” of Cotabato, and “Aleah” and “Lenlen,” both from Maguindanao, to protect their identities. She said they could only give recorded testimonies as they were currently in rural areas of Mindanao with spotty internet signal.

Based on their accounts, Omaima and Aleah were recruited in 2008 as minors, while Lenlen was recruited more recently, in 2018. The three were able to return from the Middle Eastern country only last year, according to the senator.

Lenlen, the youngest of the three, was just 14 years old when her recruiter asked her to line up for a passport at the Department of Foreign Affairs (DFA) Cotabato office.

The witness said it was her recruiter who had applied for the passport on her behalf.

“Why then did the DFA give her a fake passport?” Hontiveros said, noting that similar testimonies from Omaima and Aleah showed an apparent pattern.

“Is there a government official colluding with human trafficking criminals? We hope not. If they are not part of this arrangement, the DFA should clarify and explain,” the senator added.

“The breadth and depth of this revolting issue is one that we should take seriously. As if exploiting our women is not enough, unscrupulous recruiters and human traffickers are also manipulating and abusing our children,” Hontiveros lamented.

“This is a disgusting modus that needs to be stopped. The DFA must investigate these illegal transactions for fake passports,” she said.

During the hearing, whistleblower Alex Chiong also confirmed that corrupt Bureau of Immigration (BI) officers had a Viber chat group that displayed the list of names of women to be trafficked out of the country, possibly including minors with fraudulent passports.

Hontiveros said she had reached out to the BI to find out who stamped Lenlen’s passport and confirmed the identity of the immigration officer involved.

She said the officer was already on the list of individuals being investigated by the agency for allegedly taking part in outbound human trafficking activities.

“If we find that this is syndicated trafficking, or trafficking committed by a group of three or more persons conspiring or confederating with each other, the prescription period is 20 years. It’s not only BI that is liable here, but also those behind the fake passports,” Hontiveros warned.