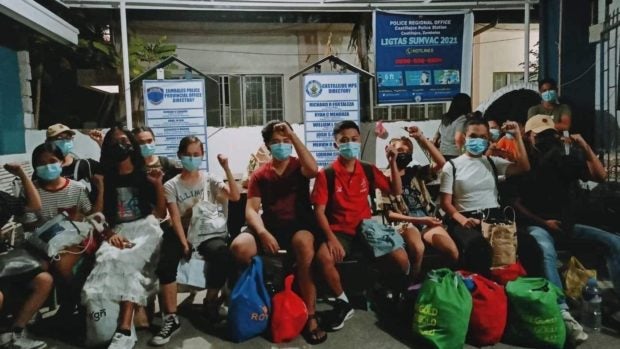 TEMPORARY FREEDOM The 11 student activists and their driver from Zambales, who were arrested on their way to a Labor Day rally in Pampanga on Saturday, will enjoy temporary freedom after posting bail on Monday. —PHOTO COURTESY OF LFS ZAMBALES

The 11 League of Filipino Students (LFS) members and their driver, dubbed “Zambales 12,” were arrested for allegedly breaching physical distancing protocol after their 15-seat van was stopped by policemen here on Saturday.

They were also charged with disobedience to persons in authority when they reportedly refused to disclose their identities to policemen manning a checkpoint in this town.

Police recovered from the group placards with the messages, “Stop the attacks” and “Solusyong medikal, hindi militar” (Medical, not military, solution).

In an interview shortly after their arrest, one of the LFS members said they did not violate any law and that “there was nothing wrong with attending a rally.”

The other LFS members also accused the police of “deliberately targeting” them.

According to Police Col. Romano Cardiño, acting Zambales police director, the office of the provincial prosecutor found probable cause to charge the group in a local court.

The student activists and their driver were detained at the police station in nearby Castillejos town but were released two days later after they posted bail of P3,000 each.

LFS welcomed the release of its members, but asserted that they were “illegally arrested, harassed and harshly treated by state forces.”

In a statement on Monday, LFS expressed worry about the security of its members in Zambales who were reportedly receiving death threats.

“The youth activists who were inhumanely arrested were also Red-tagged by front organizations of the military masquerading as civil groups,” it said.

Mugshots of the students, it said, were released and circulated through various social media pages without their consent.

LFS also alleged that the police forced the 12 to sign “surrender” documents in an attempt “to twist the narrative—which is an illegal arrest—as a mass surrender to the [police] by revolutionary forces.”

“This is without any of their lawyers being informed of the documents they were forced to sign,” it said.

But Cardiño said the activists were only asked to provide their personal data.

“[The 12] underwent a normal process in booking arrested persons,” Cardiño told the Inquirer in a text message.

Cardiño also belied reports that the activists were Red-tagged and were not represented by a lawyer.

“The very first request of the students was to have an access to their lawyer and it was granted,” he said.