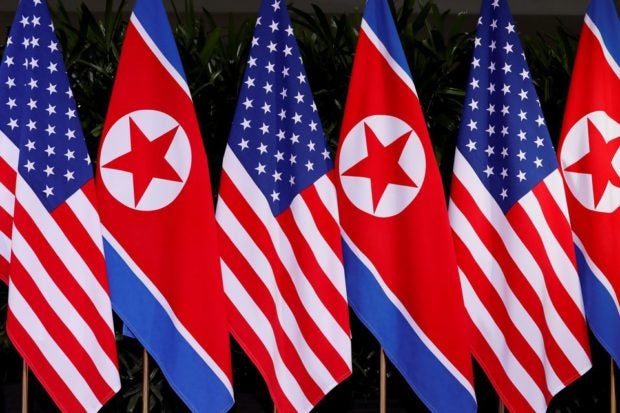 U.S. and North Korean national flags are seen at the Capella Hotel on Sentosa island in Singapore June 12, 2018. REUTERS/Jonathan Ernst

SEOUL — While North Korea’s barrage of complaints about U.S. President Joe Biden’s policies over the weekend might appear to be ratcheting up tensions, some signs suggest Pyongyang hasn’t ruled out diplomacy with the new team in Washington.

Few observers expect talks to resume soon – both countries are more focused on issues including the coronavirus pandemic and its fallout – and there are no easy ways to resolve their thorniest differences.

But some analysts say that despite its bluster, North Korea doesn’t appear to have shut the door entirely on the Biden administration just yet.

“There are signs that Washington and Pyongyang are in the early, cautious stages of a diplomatic dance,” the U.S.-based 38 North program, which monitors North Korea, said in a report on Monday.

On Sunday, North Korea released a series of official statements slamming Biden’s policies and rhetoric so far as more of the same Cold War-style hostilities embraced by previous American presidents, and dismissed talk of diplomacy as an attempt to cover up those threatening policies.

The statements came after the White House on Friday said officials had concluded a policy review in which complete denuclearization of North Korea remained the goal. It said it would explore diplomacy to that end but not seek a grand bargain with North Korean leader Kim Jong Un.

While North Korea mentioned the review, it did not specifically respond to the few details that have been released, a sign some analysts interpreted as evidence that Pyongyang is withholding judgement for now.

The North Korean statements came from lower-level foreign ministry officials, did not call out or insult Biden by name, and the threats of “worse crisis” were still conditional on U.S. actions, 38 North noted.

“It would not be a surprise if both sides use this initial period to probe and posture a bit,” the report said.

Republican Donald Trump held three summit meetings with Kim in an attempt to persuade the North Korean leader to surrender his nuclear arsenal, but achieved no major breakthrough.

Talks have been stalled since 2019, with North Korea saying it has no interest in negotiations if the United States doesn’t drop hostile policies, including tough economic sanctions.

North Korea has continued to conduct a string of short-range missile tests and develop new weapons, but since 2017 has yet to resume launches of its longest-range missiles or test nuclear bombs, which would be seen as a significant challenge to Biden.

“The concern was that North Korea would do something so provocative that the Biden administration would have no room for diplomacy,” said John Delury, a professor at South Korea’s Yonsei University. “But both sides are avoiding pissing each other off. They could be calling each other names, but they aren’t.”

38 North’s Rachel Minyoung Lee, a former open-source North Korea analyst for the U.S. government, told Reuters it was notable North Korea has consistently not published its official statements on the Biden administration in domestic media.

“It indicates Pyongyang is keeping its policy options open,” she said.

The Biden administration simultaneously signaled a hard line on human rights, denuclearization and sanctions, while making diplomatic overtures that U.S. officials say have been rebuffed by Pyongyang.

American officials have stressed they are looking for “practical” diplomatic goals and are open to talks, but say the ball is in North Korea’s court.

“We have… a very clear policy that centers on diplomacy and it is, I think, up to North Korea to decide whether it wants to engage or not on that basis,” U.S. Secretary of State Antony Blinken said on Monday.

Even if both sides wanted to go all in on diplomacy, the ongoing pandemic may make an already difficult process nearly impossible for the near future, Delury said.

“The COVID situation really does constrain diplomatic options and puts both parties in a holding pattern,” he said.